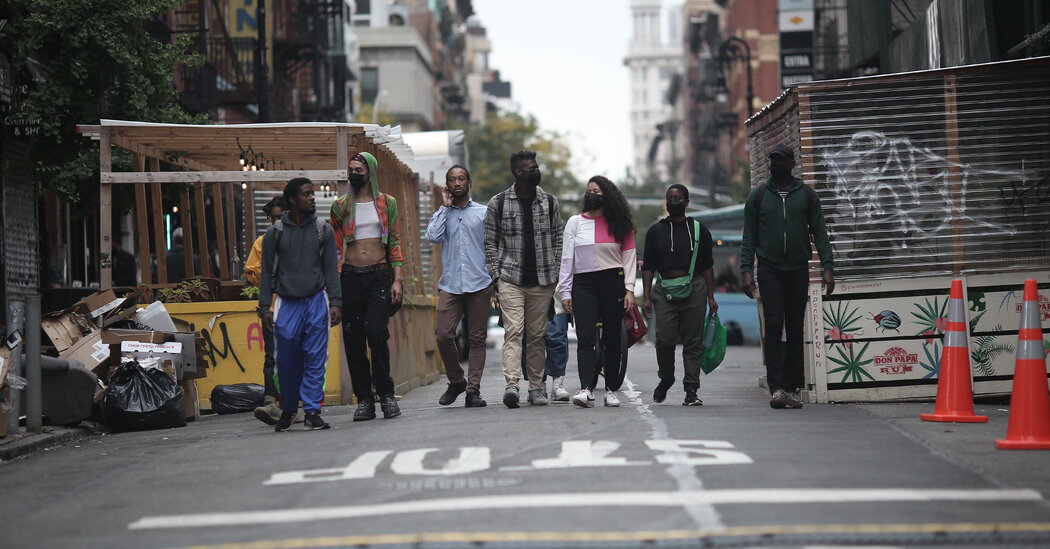 Last Friday at 5pm, I joined a small crowd at the intersection of Orchard Street and Rivington on the Lower East Side of Manhattan to see “The Sound of Morning,” a play by sculptor and performance artist Kevin Beasley. , commissioned by the Performa Biennale. . (Although Beasley’s performance is over, she can be watched on performa2021.org, and the rest of the festival shows, which run through the end of the month, will also be streamed live.) The simple act of placing an outside play charges the environment with an air of intention and expectation, even before the play itself actually occurs. I studied the fire escapes and tailor shops and restaurants of Orchard Street, or the passer-by carrying a kendo practicing sword, as I might have studied a painting.

But then 10 men and women appeared, one lazily throwing a basketball. As they sprawled out and interacted with found or prepared items – ripped up a paper bag, dragged a can across the asphalt, opened a ChapStick, dismantled a fence – tiny body microphones picked up their sounds and Beasley stood up. in an ad hoc DJ stand, mixed live and broadcast. As a John Cage-style trick to getting us to notice the texture of the city, it was a bit too much – the amps didn’t seem necessary. But as a metaphor for the violence to which black and brown bodies are subjected in public space, it was powerful. Almost everything the performers did resonated, simply because of the context in which they were acting; and when viewers held up their iPhones and cameras, to me they looked like guns.

Last year John Tsombikos and Enno Tianen started sending drawings to each other, Tianen from his home in Seattle and Tsombikos in Manhattan, an exquisite long-distance corpse game in which each added something to what the other had. sent. Eventually, they extended the game to paintings, shipping exposed and unprotected panels, their frames artfully packed with books so they could be sent via the Postal Service’s media mail. The results, displayed in a former restaurant space with several works hidden under a hood, are by turns poignant and hallucinatory, a collision of distended faces and abstract shapes, with the streams of each artist’s consciousness flowing freely through the room. ‘other.

Tsombikos and Tianen’s contributions to the graffiti community are much admired – Tsombikos for a multi-year campaign he led in Washington in memory of a childhood friend who committed suicide; Tianen for being one of the few people to tag a Brooklyn Bridge tower – and their imagery here references the street life’s capacity for possibility and violence with a surreal undertone. A police camera mounted on a Harlem street sign becomes the eyes of a smiling demon; a pistol comes out of the zipper of a character’s pants; disembodied eyes float through the frame; men are shown handcuffed or imprisoned. The graffiti artist’s impulse towards dissent flows through the painting.

The paintings are covered in postage stamps and stickers (itself a graffiti tradition), marks added by the officials who handled them, a touching touch that greatly expands the collaborative effect. They ring with the mail art made by Duchamp, Ray Johnson and On Kawara, who over the years have sent hundreds of telegrams to friends who simply informed them that he was still alive. The strategy requires a certain abandonment of aesthetic control, but by proposing a way to assert its humanity outside the standard circuits of the market, it is an attractive profession. Tsombikos and Tianen are achieving something as close to the point of art as one might hope: another way of letting people know they’re still alive.

Candy Chang and James A. Reeves

Memorial works of art are notoriously difficult to achieve. Yet Candy Chang and James A. Reeves, two New York artists who have created similar installations in the past, struck the right tone with â€œAfter the End,â€ a participatory work in the historic Chapel of Green-Wood Cemetery. , the final resting place of famous and infamous figures, from Boss Tweed and the original Brooks Brothers to composer Leonard Bernstein and artist Jean-Michel Basquiat.

The format of â€œAfter the Endâ€ is very simple. Paper and pens are provided with a message: â€œDescribe your loss. What comforts you? â€After writing down your thoughts, you roll up the sheet of paper and insert the scroll into a light grid of circular openings. Then you can sit in the apse of the chapel and listen a calming ambient composition, broadcast over loudspeakers. Texts from anonymous submissions are projected on the ceiling. “I have lost 3 members of my family, 2 to Covid, in the past 2 years”, “Grief has changed who I am,” says another. Comfort is also expressed: “The birds are still singing”; “I can still find reasons to laugh.”

Solemn and understated, the work copies the stripped-down aesthetic of the ’60s minimalism that has become the must-have aesthetic of monuments, from the Maya Lin Vietnam Veterans Memorial to the National September 11 Memorial and Museum (which echoes to the work of Michael Heizer from the 1960s). â€œAfter the Endâ€ does not deal specifically with the Covid crisis either. Instead, it offers anyone suffering loss or struggling with contemporary life a place to mourn, meditate, and maybe heal a bit.