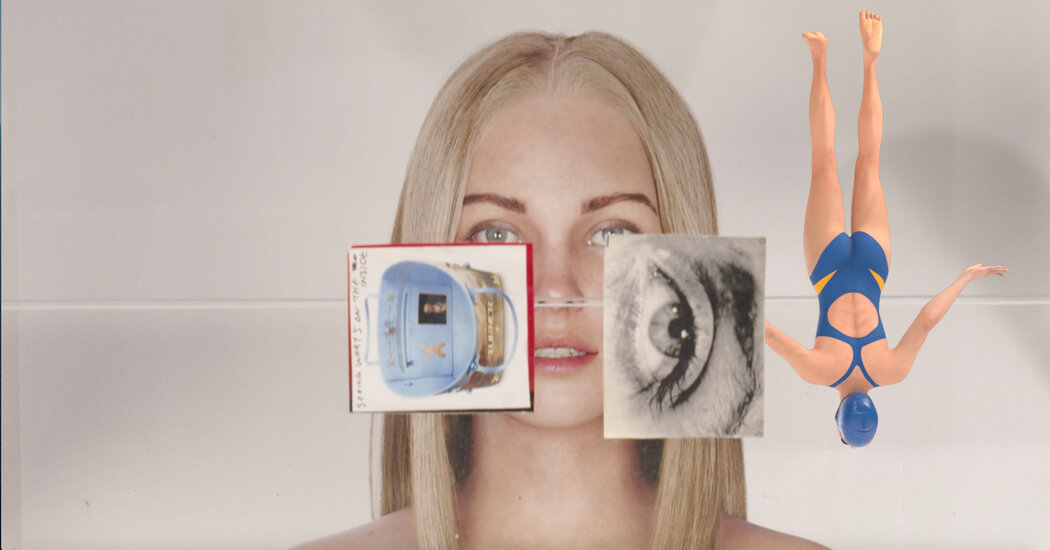 The Germans have a nice term to describe the tsunami of images that overwhelmed us during the digital revolution of the 80s and 90s: Bilderflut, or the “deluge of images”. Sara Cwynar does not mention this term in her six-channel video “Glass Life” at Foxy Production. (The show’s title instead comes from Shoshana Zuboff’s 2019 book “The Age of Surveillance Capitalism,” which describes how data-driven technology has infiltrated our lives and eroded privacy and healthy forms of social connection. )

Cwynar’s ‘glass life’, however, includes a deluge of images and a recurring figure: a swimmer sliding between the images, alluding to what it is like to live in a world virtually inundated with photographic images every time. turning. Nowadays, algorithms “organize” the images presented to us, and “Glass Life” follows this logic. The video is deeply personal, functioning as an archive of Cwynar’s past work. It features images from current events, sports figures, artists, G20 political leaders and references to authors who have written about photography like Berenice Abbott, Walter Benjamin and Vilém Flusser. It also features people and entities who have deployed imagery with surgical expertise: Marilyn Monroe, Ronald Reagan, Kim Kardashian, Google and, of course, the algorithmic “surveillance” capitalism Zuboff refers to.

“Glass Life” beautifully captures what it’s like to spend your life scrolling through images designed to grab your attention and the fatigue of living in such a climate. I was exhausted after watching this 19 minute video. Not too tired to check out my Instagram a few minutes later, however.

As a critic, I am always jealous of the joys that artists derive from manufacturing a work, while I am limited to the different pleasures that the grip provides.

In their performance at Luhring Augustine in Chelsea, Janet Cardiff and George Bures Miller, the well-known Canadian duo, correct this creative imbalance with a fantastic piece called “The Instrument of Troubled Dreams”.

For years, the couple’s iconic works have incorporated speeches and sounds recorded in surrealist installations: “Escape Room”, in the back space of the gallery, looks like a crazy model maker’s studio and includes excerpts equally disturbed audio. Cardiff and Miller’s ‘Instrument’, in the main gallery room, picks up the sounds they’ve always used but lets the audience decide how to put them together.

In the center of the room is what looks like a normal upright piano. Walk up to play it and you’ll notice a strip of classic Dymo tape stuck over each key: “Wind Gusts” or “Cat Fight” or “Police” read some; others say “Kerk Organ”, “Synth Track” or “Guitar”; 11 keys are simply labeled “Voice”. Press a key and the sound named above resonates throughout the room.

By playing “chords” you can combine a spooky vocal track (“she hid behind a secret panel in the wall; when the police arrived they searched the whole house”) with whole organ sounds. also scary and howling felines. Or you can mix those same ominous words with a rustle of wind and a silent guitar.

The full Dada cacophony can be achieved by playing multiple pieces of text at once. Or your fingers can peck at a “melodic” sequence of sounds and words that almost tell a cohesive story.

As you begin to perfect your “symphony”, you imagine donning the creative mantle of Cardiff and Miller. And then you realize that playing the machine will never do you; their brilliance was to invent it.

In 1981, Joey Terrill produced a series of tall, narrow canvases, titled “Chicanos Invade New York,” for Windows on White Street, a contemporary art series on display in a lower Manhattan shop window. Painted in flat, contrasting colors in a style reminiscent of a rotoscope video clip, the canvases feature artist Angeleno and his friends as fish out of water in New York City and his art scene. Terrill rolls out tortillas in someone else’s loft; squint in a squall of snow outside the Guggenheim Museum; reads a copy of the New York Post with the headline “John Lennon Shot Dead”.

At Ortuzar Projects, a few blocks west of this storefront, the same triptych is one of the highlights of “Once Upon A Time: Paintings, 1981-2015”, Terrill’s first solo exhibition in New York. for 40 years. Other pieces – a double portrait titled “Not All Our Lovemaking Had to Smell of Poppers”, an extraordinary polyptych on the end of a relationship called “Breaking Up / Breaking Down” – address alienation and belonging, or race and orientation, more bald. In works from the 90s and 2000s, Terrill adds more elaborate backgrounds or, from photos, more finicky details. But the same haunting tone runs through the entire exhibition, an inward-looking combination of bravado, self-deprecation and vulnerability.

Stacy Lynn Waddell’s first solo exhibition of paintings and works on paper in New York City exploits the idea of ​​gold for its material properties; its cultural value as a marker of veneration, including in art such as Byzantine icons or paintings by Gustav Klimt; and its role in the emergence of global racial capitalism in 17th century Europe. The North Carolina-based artist’s show is aptly titled “Mettle” – once a spelling variant of the word “metal” – but also an indication of resilience in the face of inhospitable situations.

Waddell cites three “golden ages” in the series: American, Dutch and Malian. Two small tondos reproduce a painting by the famous 19th century African-American landscape painter Robert S. Duncanson; Waddell etches the image into the paper using a variety of reused tools, embellishing the resulting sepia “design” with blue pencil and gold foil to catch the viewer’s eye. A group of floral still lifes, based on 17th and 19th century Dutch vanity paintings, are made by constructing gesso-covered paper to create a bas-relief and then applying gold leaf over the entire surface.

A series of golden portraits, based on photographs from the late 1960s and early 1970s by Bamako-based post-independence photographer Malick Sidibé, depicts trendy young Malians who appear ready for a new era of global modernity – they crouch down, as if ready to take action or take positions of power. As with the floral reliefs, the paintings ask the viewer to slow down: you have to adjust your position, just by capturing the reflections, to see the figures. The result is a charming, almost human encounter – a visualization process akin to getting to know someone as a fully dimensional being in the face of the often dehumanizing conditions of our world.