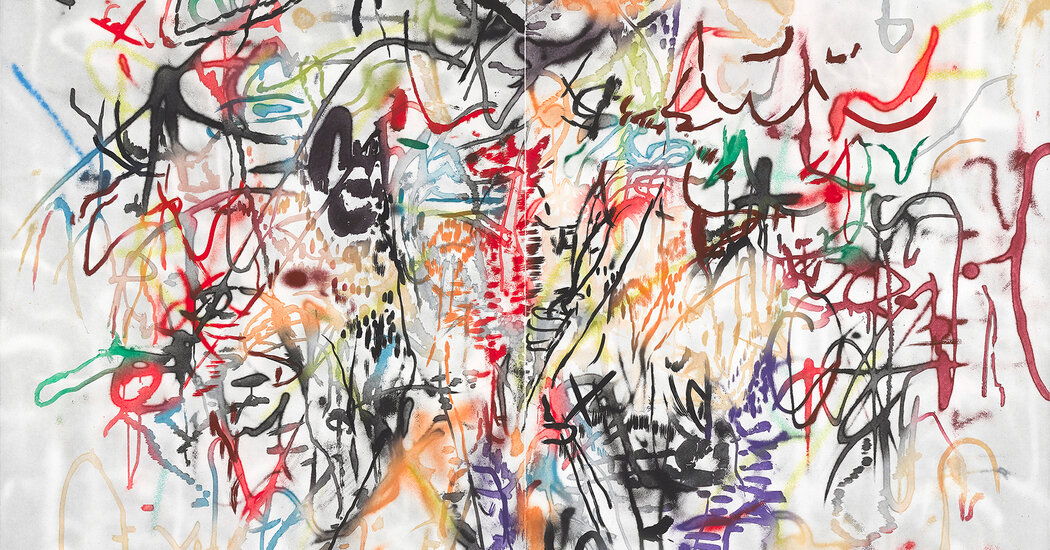 Someone – surely an artist – once said that the best review of a work of art is another work of art. If so, the excellent exhibition of prints Julie Mehretu did at the Gemini GEL studio from 2008 to 2018 usefully criticizes the paintings that dominate her current mid-career investigation at the Whitney Museum.

Mehretu never stopped as an artist, but the prints she started making in 2008 have always been stronger than her paintings in every way: touch, spatial illusion, color and above all scale. They exude a sort of luxuriance, avoiding the fragile impersonality and formal melodrama that are often found in his paintings. These last two qualities were mostly banned in the black on gray paintings seen at Marian Goodman in 2016, but they resurfaced in her later paintings.

Prints, for their part, have for the most part been reinforced. The first works in the exhibition are three small drypoint etchings from 2008, 2010 and 2012 remarkable for the variety of their delicate marks and their articulation between abstraction and representation. (They evoke the landscapes exploded in Otto Dix’s etchings â€œWarâ€ of 1924.) The highlights of the show are â€œSix Bardosâ€, a series of large aquatints from 2018 inspired by the six intervals between life and death in Buddhism. They combine with suave graffiti, calligraphy and fragments of images in an effortless tangle of lines which sometimes shine from within. Five are beautifully colored, the sixth and final, “Last Breath”, is a dense, all-black tangle that nonetheless levitates. That title aside, the “Bardo” prints have a pulse that too many of Whitney’s paintings lack.

Lee Lozano was, to borrow the title from Nell Painter’s ironic memoir in 2018, â€œOld in Art Schoolâ€. She had already obtained a bachelor’s degree from the University of Chicago in 1951 before starting art school and earning a bachelor’s degree in fine arts from the Art Institute of Chicago in 1960. From there she quickly moved to New York. “Drawings 1959-1964” in Karma traces the beginnings of his career, from student work to the search for a voice as an artist.

Perennial art school subjects dominate the 1959 and 1960 drawings, most of which are untitled. There are human skulls rendered in graphite on paper, portraits and fragments of still lifes: a lost nut, an asymmetrical strawberry. Then the work takes an abrupt turn. Phalluses, crucifixes, planes and tools appear, drawn in bright pencil and charcoal, often as crude gags. Slogans from NYC subway ads are turned into vulgar slogans, most of which cannot be printed here.

Elements of Pop Art, comics, and surrealism enter Lozano’s vernacular, which overlaps with painters such as Philip Guston and Judith Bernstein, whose diversion from “pure”, non-objective abstract expressionism was one. emphatic political statement, and sculptors like Yayoi Kusama and Louise Bourgeois, who treated the phallus like a sculptural amulet or a toy. In the space of a decade, Lozano, who died in 1999, will focus on outraged conceptual performances such as abandoning the art world and boycotting women. These actions required discipline and commitment, but you can see the same impetus here, as Lozano learned to draw like a conventional, skilled artist – then unlearned everything to grow up to be a big one.

In the 1950s, the Florida Highwaymen, a collective of self-taught black artists, developed a vaguely unified aesthetic: sumptuous Fauvist landscapes of subtropical Floridian splendor – skies streaked with burgundy, flaming swamps that seemed to reach phosphorescence, and poincianas so red that they threatened to ignite. Led by Harold Newton and Alfred Hair, supernatural entrepreneurs who identified a market for both romantic naturalism and the kitschy Deco fantasy practiced by South Beach hotels, they enriched their paintings with saturated color – the Hudson River School showed up at 11. Newton and Hair assembled a group of two dozen hobbyists who produced ecstatic reveries, painting on roofing boards and framing them with pieces of baseboard, hauling them along Highway 1 along the Florida coast, often unloading them before the paint dries. Moisture radiates from their surfaces.

By all accounts, the Highwaymen were less interested in color theory or cannon than in earning a living. The priority was volume. The speed of the strokes is immediate – many compositions lean towards abstraction, slowing down just enough to allow for a windswept palm. Estimates place their production somewhere between 50,000 and 200,000 paintings. The 11 exhibits are an exhilarating little taste of an under-recognized segment of American folk art.

This type of painting was once considered â€œthe art of the motel,â€ but the Highwaymen legacy is not a technical installation. It is self-determination. Banned from performing in the Jim Crow South galleries, they wanted their own market, carving out a space for themselves in a world where they were otherwise unwelcome – art as a means of survival.

A sinister sequence runs through the work of Hugh Hayden. His precise and perfectly executed sculptures, testifying to his training as an architect, are saturated with sharp critiques of dominant American institutions. In â€œHuey,â€ his third solo exhibition with the Lisson Gallery, Hayden shows the overwhelming impact of two of these institutions – organized religion and athletics – on black identity and masculinity. Arranged sparingly across three rooms, the sculptures – all from 2021 – use a minimal but careful selection of materials to reinterpret familiar objects in a Gothic sensibility.

In the first gallery, visitors are confronted with an installation of church pews found, refurbished and covered with red nylon hair; mounted along the right wall are three white oak and boar bristle hairbrushes, each carrying sharp steel daggers as handles. These works, which are part of the “Good Hair” series, refer to Hayden’s experience growing up in the Christian church, with his strict rules on outward appearance. In the adjoining room, Hayden continues this theme of discipline and ritual with a set of wall-mounted basketball netting made from Gatorade-dyed rattan (“Fruity“) and other organic fibers.

The final space presents seven sculptures, carved from ebony from Texan and Gabon. While the slanted and asymmetrical iterations of the doors and chairs make appropriate comparisons to Robert Gober’s art, they stray sharply from this heritage in their centered black visual culture, as indicated by their surface color and references. in their titles – a little black hammer, titled “Uncle Phil”, nods to the character of James Avery in “The Fresh Prince of Bel-Air”. With this attention to detail, Hayden establishes himself as a remarkable figure in the lineage of American conceptualism.

Protests, even when they flood social media and cripple cities, are fleeting. Art allows it to last. The work of 10 artists in â€œProtest and Recoveryâ€, including painting, sculpture and community performance, are both expressions of solidarity with collective actions and attempts to articulate their meaning.

“ABC: A Leson in History” (2020) by Lara Baladi, a grid of 30 black and white prints, is inspired by her collections of graffiti, cartoons and posters of the Tahrir Square demonstrations in 2011, and children’s books from the 1950s used by military regimes to promote nationalist values. This updated primer combines Arabic words like â€œfreedomâ€, â€œvoiceâ€ and â€œmemoryâ€ with images that encourage resistance rather than obedience. Nearby, 44 oil paintings from Chow Chun Fai’s “Portraits From Behind” series chronicle the 2019-2020 pro-democracy uprisings in Hong Kong. Based on found snapshots, their expressive brushstroke and intimate scale throw us into the fray. Taken during the 2019 Women’s March in Chile, a series of photos by Eugenia Vargas-Pereira, “Tus ojos cuentan la historia (Your eyes tell the story)”, documents the ornate masks worn by protesters, who transformed resistance to police surveillance as an opportunity to inject beauty into political action.

Sreshta Rit Premnath’s â€œKettlingâ€ (2021) is an elegant arrangement of steel crowd control barriers, shiny emergency blankets and foam panels; its title and materials refer to a dangerous police tactic to contain crowds. It is a welcome reminder that despite the fierce hope embodied by so many high-profile works, the language of art can be instrumentalized for many purposes.