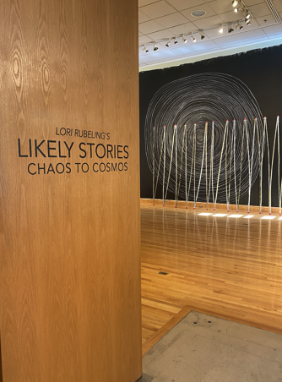 Ms Rubeling’s goal, as stated in her own papers, was to “introduce concepts of climate crisis that enable the body, mind and spirit to receive and interpret information about climate change” . Rubeling said that the term “Probable stories” symbolizes the knowledge accumulated through experiences while “chaos to the cosmos” refers to a state of understanding and being. She imagines herself as a pre-Socratic philosopher who wishes to have an impact on our understanding of the climate crisis.

“We are emerging from a huge climate change,” said Rubeling. “If we can approach this disruption as a game because we’re part of it, we’d be much better off than being afraid.”

A walk in the gallery

Audiences get a first glimpse of the vivid wallpaper, a hypertext collage, and a wall filled with numerous white rings layered with bamboo stems. Rubeling’s work starts the conversation by communicating various themes such as climate well-being, sustainability, order, perception and memory.

As a result, the art gallery is transformed into a room for peer-to-peer discourse. Rubeling explains that his work evolves into “points of contact to have a conversation around [so that we may gain a] shared understanding… in order to change our behavior.

Rubeling also stresses that the exhibition should be seen as an experience rather than a showcase: “This is what I ask everyone: how is your body affected by being in space?

Some of Rubeling’s notable works, The Sovereign Sequoia and Straw cutting scheme, are inspired by her trip to Sequoia and Kings Canyon National Park in California in 2018. In an interview, Rubeling compared her experience in creating these works to the pre-Socratic philosopher Anaximander who found a way to represent the motifs from heaven to earth by creating a map.

“Like the pre-Socratics, I represent my direct observation in three-dimensional objects so that my experiences become shareable,” Rubeling wrote.

The Sovereign Sequoia represents several white circular figures that represent the growth rings of the tree. Not to mention, Rubeling states that the bamboo ruler is “a collapsed representation of the actual height of ‘General Sherman’, a 2,000 year old redwood tree.”

The Straw cutting scheme depicts an imaginary height of a giant sequoia with a height of 279 feet (right) and the Baltimore shooting tower in comparison (left).

Rubeling explains his strategy by giving the public a point of reference for understanding the redwood: “On the East Coast (of the United States), we rarely encounter large trees. The 240-foot Baltimore Shot Tower is the closest object of comparison.

Guide us through the curation process

Like many artists, all of Rubeling’s thinking begins in his sketchbook. Rubeling remembers her past experiences, recent artwork, decades of study and other sources of inspiration to find a theme and the materials she would like to use. This work translates into 5 months of planning, research and configuration of the physical space in which she works. “I always think of exhibitions as installations,” said Rubeling.

“I don’t just hang up the job. It is a space that I will fill. – Lori Rubeling

After research and planning, Rubeling and his team put together the materials for a summer of work. “I had to harvest the bamboo… [which] takes 12 weeks to cure, the wallpaper was printed, and I had … [a team of research] assistants and co-curators … [who created the] hypertext wall, ”she said.

The diversity of the supports used for this exhibition posed some challenges to the installation. “Initially [the infinity drawings were] was going to be on canvas and we were going to staple it … [but] facilities… tell us]’No, that’s too many holes.’ Sometimes these kinds of conversations have to take place. Despite the obstacle, the artist was satisfied with the result and even got permission to paint the wall black to The Sovereign Sequoia.

Student experiences of the exhibition

Rutter was hired as an Exhibition Assistant in her first year after completing a Fundamentals of Design course with Rubeling.

Tana Marshall is another research assistant. She explains the process of the Hypertext Wall co-curation team: “It was very sporadic,” she said. “In the beginning, we… had a bunch of things to work on… we had narrowed it down and figured out what was most important. It took a lot of planning and behind-the-scenes work to put it in order. ”

The exhibition will remain open in the Greenspring Art Gallery until the end of the semester. There will be several events based on the Rubeling exhibit. A Society of Design Arts webinar will take place on October 26, fiction writing readings on November 1, and a performance reception on November 7 for the Theater Media and Performance production. As you like it.