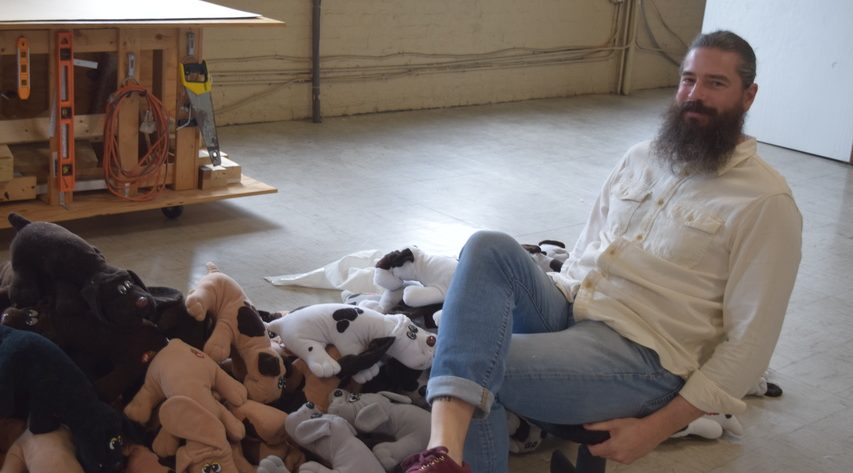 Upon entering the Walter Elwood Museum in Amsterdam several years ago, artist Brent Birnbaum felt a connection to the place.

At the time, he was looking for a studio apartment outside of the Rockaway Beach neighborhood in Queens, where he lived.

Birnbaum stumbled upon much more than that at the museum, where he has since not only secured studio space, but also opened a contemporary art gallery called Walter’s.

“A lot of my artwork that I’ve been cultivating for 20 years is about objects and building collections,” Birnbaum said. “So when I first walked in here in 2017, I immediately thought, ‘This is for me. It’s not just by chance.

The museum is a maze of around 20,000 objects, from portraits to mugs to stuffed animals, collected locally and around the world. The collection was started by Walter Elwood, an educator in the Greater Amsterdam School District in the early 1900s. He opened a museum at Fifth Ward School in hopes of bringing items from his travels and trips to other people to students who might not have the opportunity to see the world. The museum has moved several times over the years and is currently located at 100 Church Street in the former Sanford Carpet Mill industrial complex.

Gallery space
The Walter Gallery opened last year and was born out of a partnership between Birnbaum and the museum, led by general manager Ann Peconie.

“After the Deluge”, oil on linen by Jeff Wigman, exhibited at Walter. PROVIDED

“He saw a space we had that we used for storage [and] he said it would be a great contemporary gallery,” Peconie said.

Birnbaum had experience running galleries in Rockaway Beach storefronts that had been abandoned due to Hurricane Sandy. The purpose of the galleries was to rebuild the neighborhood while helping artists.

“It was the kind of thing that interested me. something for the community, not just for the artists,” Birnbaum said.

Walter’s has a similar story.
Birnbaum cleaned up the museum’s old storage space, had some display walls installed and painted it over. He also commissioned artist Lauren Clay to design a zine room that functions as a store and exhibition space.

“I like finding artists who haven’t had a ton of opportunities yet and I think they deserve them. I like to research artists who are not recognized,” Birnbaum said.

This includes Jeff Wigman and Panayiotis Terzis, whose works will be on display until Sunday when there will be a closing reception from 2-4 p.m.

Wigman is a Troy-based artist whose oil paintings have intense narrative lines that are at times carefully chaotic. His exhibition, titled “The Air We Breathe,” features an eerie painting with skeletons walking hand in hand on a sunny day down a mountainous path. Another work depicts a large ornate tower leaning towards two figures standing near a displaced portable toilet.

Terzis, whose work is featured in the zine room, is a New York-based artist, printer, and publisher. The exhibit at Walter’s is titled “Mega Pan” and includes a wide range of works by Terzis, including gouache paintings, serigraphs on Plexiglas, books and more.

Student showcase
Starting Thursday, Walter’s and the museum will host an exhibition of works by students from the Greater Amsterdam School District.

From Peconia’s perspective, the museum is going back to its roots.

The museum once hosted a student showcase, but has not been able to do so for over a decade.

For students, seeing their work exhibited in a gallery/museum can have a big impact, according to Donna Marek, longtime art professor at the Marie Curie Institute of Engineering and Communication, who is one of the teachers. involved in the exhibition.

“It’s such a pride for them to show their work to the community and to their parents because they’ve worked so hard at it,” Marek said.
“For us as art teachers, it’s just wonderful to show students’ work, but it’s also important to us that the community understands how important the visual arts are in the world, how many different careers you can get in the arts.”

The show will not necessarily include the work of all students in the district, but it will provide insight into many mediums and projects that students have worked on over the past year.
“It instills that pride in their work and their ability. We want them to gain pride and that’s the most important thing,” said Marek.

There will be an opening reception from 5-7 p.m. Thursday and the show will continue through Sunday, May 15.

To get to Walter’s, visitors must first walk through the museum and so even those who come to see the work of Wigman or Terzis end up wandering through the museum, which has around 15 different exhibition halls.

The vastness of the collection piqued Birnbaum’s interest years ago and since learning more about Elwood, he has felt closer to the educator.

“A lot of my artwork that I’ve been cultivating for 20 years is about objects and building collections,” Birnbaum said.

Previously, this included vintage board games, which he deconstructed to create intricate collages. Recently, he collected colorful toilets, which were popular in the mid-1900s, to create a large-scale installation. He also collects Pound Puppies, toys that were popular in the 1980s whose advertisements assumed that children had to save the stuffed dogs.

Birnbaum also created an online presence for Walter’s, with a website and an Instagram account.
“Some people on Instagram will call me Walter because my username is Walter Elwood,” Birnbaum said. “I feel like it’s become a pseudonym for me. And I feel like I’m really honoring what Walter Elwood was doing.

For more information on visiting Walter walters.art or walter__elwood on Instagram. To learn more about the museum, visit walterelwoodmuseum.org.

More from The Daily Gazette: