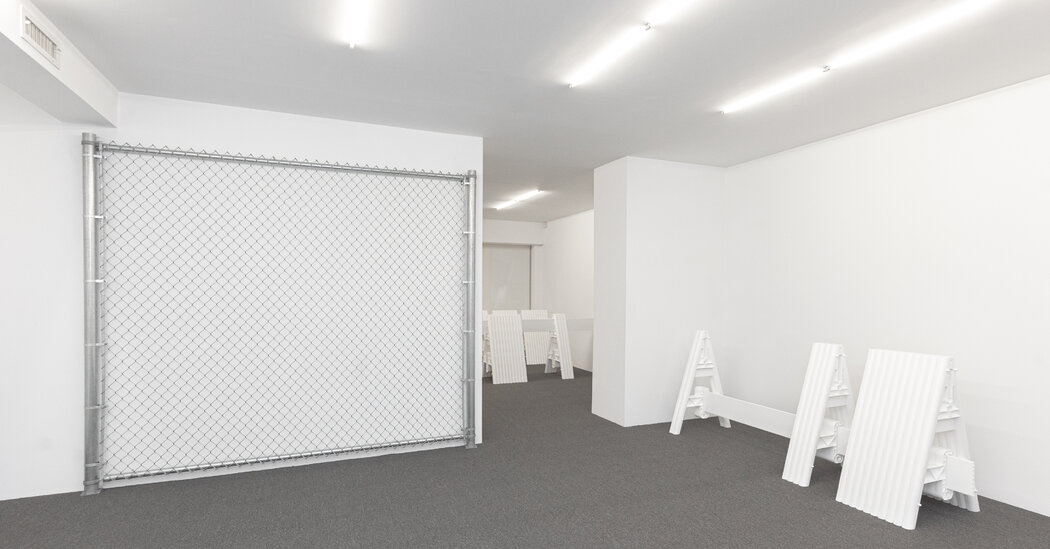 More than a few artists I know have made a pilgrimage to Germany to see sculptor Cady Noland’s 2018-19 retrospective at the Museum of Modern Art in Frankfurt. That says two things: one is that his work, an amalgamation of post-punk minimalism, installation art and institutional criticism, is crucial for some artists; the other is that the show did not travel to the United States, although Noland’s work is a sharp criticism of American history and politics.

You can now see it in “The Clip-On Method” at Buchholz, a compact solo exhibition that coincides with the release of a two-volume monograph of the same name edited by Noland and art historian Rhea Anastas.

Six new sculptures are here, all “Untitled” (2021) and employing well-known Noland vernaculars. There are two galvanized steel chain link fences and four plastic barricades. A freshly installed gray carpet covers the wooden floor and gives off a chemical smell of glue, adding to the unsettling feeling of the gallery as a holding cell or place of containment. Three works from the early 1990s are also included: enlarged black-and-white images from a police patrol manual, annotated with an anonymous handwritten text.

The “Clip-On Method” books themselves, which are on display, echo the pragmatic conception of the Police Handbook and include Noland’s writings and photographs of his work, as well as sociological essays selected by the artist. and addressing sex, death, fame, race and psychopathology (a particular topic of Noland). The title is not explained, but many of Noland’s sculptures include objects – guns, handcuffs, American flags – suspended from steel rails, as in the enlarged photograph of a man with two sets of Budweiser’s six-pack plastic rings hanging from his belt in Noland’s work “Clip-On Man” from 1989. (The cover of one of the two volumes of “The Clip-On Method” features an image by William Randolph Hearst, with accompanying text that describes how it ushered in an era of yellow journalism and sensationalism.)

Noland was prescient in the ’90s, translating cool’ 60s minimalism into dark, politicized critiques of power and violence, and showing how these phenomena are shrouded in myths defending patriotism, social mobility, and meritocracy. Revisiting his work after Donald Trump’s presidency and the current epidemic of police violence and mass incarceration, and thinking about it alongside that of other artists like Cameron Rowland, Mona Hatoum or David Hammons, chillingly reinforces to how important and necessary his work is. – too rarely seen here – is.

Like Emily Dickinson with his narrow yardstick, like Miles Davis with his muffled trumpet, veteran Iowa painter John Dilg knows the power of a whisper; his small landscapes, made in a restricted palette of finely applied cold colors, have an intimate beauty that can only arise from restraint. Fourteen sparse and imaginary views of land and water, each recently painted, each barely larger than a notepad, each in whispering tones of sky and camel blue and artichoke green, are now featured at Presenhuber, in a show called “Flight Path”. “Together, they are as intimate and captivating as a private chamber music concert.

Dilg, who was born in 1945 and teaches at the University of Iowa, enjoys disciplining the outside world in rough symmetry, cutting his webs in half with a river up and down or centering a gorge between two escarpments. But these Midwestern landscapes hardly conform to the Manifest Destiny ideal. The water and the sky usually appear in the same faded blue or green, and the application of oil sparingly reveals the rough weave of the cotton canvases, giving the landscapes a bumpy materiality almost like a fresco.

With their repeated and stylized conifers or ice floes, these landscapes are more general signs than specific sites; the limitation of a few small standard canvas sizes also forces us to regard these views as explicitly constructed. Its narrow range of tones is based on the chromatic research of Giorgio Morandi, Agnes Martin and Luc Tuymans, although initially the celadon greens of Dilg made me think of classic Korean ceramics: beautiful because it is fragile, invaluable because it can break.

Humans are rare in Dilg’s landscapes, although their impact is not; in “Improvements”, large tree stumps stain the bank of a river like pockmark marks. And for New Yorkers who have spent the past week or so cuddling around overloaded air conditioners and parading past bursting fireballs in the Gulf of Mexico, Dilg’s whitewashed landscapes can feel like they’re disappearing or withdrawn – as if these faded little canvases were predictions of what we once called the natural world. A painting here, of a river valley whose greenery has been engulfed in white, has a title that could apply to everyone: “Approaching Future”.