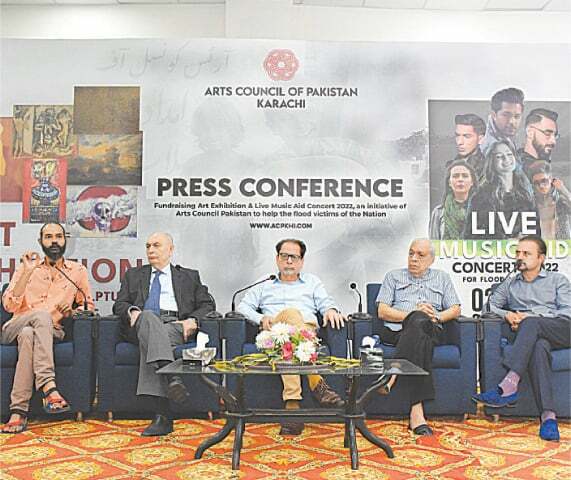 KARACHI: The Pakistan Arts Council is organizing a three-day art exhibition starting Friday (today) with proceeds going to relief efforts for those affected by the floods. A total of 50 paintings and 10 sculptures were donated by prominent collectors and artists for the cause.

Addressing a press conference on Thursday evening, council chairman Ahmed Shah said that in 2005, when a devastating earthquake hit northern Pakistan, the Karachi Arts Council took an initiative similar. In 2010, when Sindh was hit by flash floods, the cultural space played its part in alleviating the suffering of compatriots. This time the situation is worse than before and our brothers need us. “It has been more than a month since the council started its relief activities for which we spoke to our friends and members; the council itself donated 20 million rupees to the initiative from its own account. Then we sent rations to the affected areas, then we adopted two camps. A week ago, we took on another responsibility: all artists and arts councils in Sindh are supplied with dry rations.

The director of the council’s art institute, Shahid Rassam, pointed to another reason for holding the exhibition. He said recently that discussions about “heartless” artists have raged on social media, while history tells us that whenever society faces such difficult times, artists have played their part without Reserve. “This show is proof of the fact. There are individuals who have donated works of art from their personal collections, which usually does not happen. They would give you cash but rarely work from their collection. For example, we have a painting by Satish Gujral and one by Tasadduq Sohail. Also, the exhibition is the revival of the Ahmed Pervez gallery [in a new space] to the council. »

Mr. Shah informed the media that the exhibition will open at 5 p.m. It is a unique sight as it is the first time that painters and sculptors from all over Pakistan have donated their works to such a cause, and none of them have charged a single penny for it. They include masters, contemporary artists as well as donors.

“We have two sketches made by the legendary Sadequain on display. All proceeds from sales will go towards flood relief efforts.

He briefly talked about a musical concert for the same purpose, which will be held on October 2 at Karachi Gymkhana, which will be attended by Asim Azhar, Aima Baig and Natasha Baig.

Exhibition curator Muhammad Zeeshan said as an artist he has always thought about what artists can do to get back to those we know or don’t know, because together we are a society. .

The History of Kelvingrove Art Gallery and Museum in Glasgow