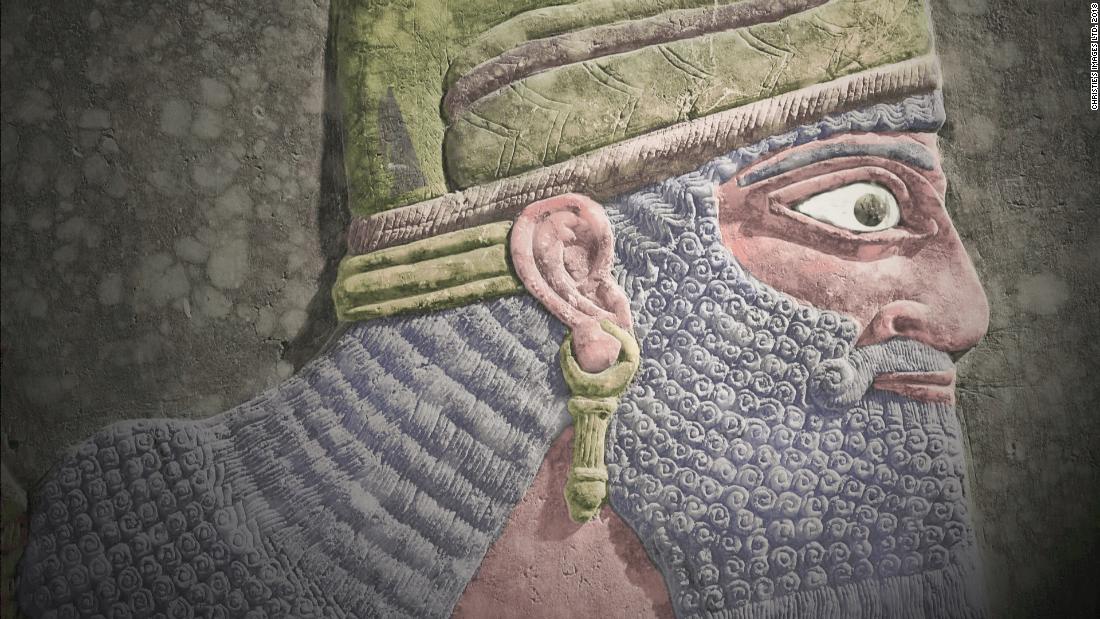 The sculpture has tripled its presale estimate of $ 10 million, and the buyer remains anonymous.

The carved panel was excavated in the 19th century from the ruins of the Northwest Palace in Nimrud, present-day Iraq. For years it remained in a private library with its value unknown.

Christie’s auction of this solid gypsum plaque depicting a seven-foot-tall deity marked the first high-profile sale of Assyrian antiquity since then.

In 1845 a young British adventurer named Austen Henry Layard arrived in Nimrud and began excavations. Since the collapse of the Assyrian Empire towards the end of the 7th century BC, the site had remained relatively intact and it found a wealth of archaeological gems.

At the time, Iraq was part of the Ottoman Empire, and its Turkish rulers seem to have seen no problem with Layard depriving the region of much of its heritage.

The Grand Vizier of the Ottoman Sultan wrote a letter to Stratford Canning, then British Ambassador, who, in the words of his addressee, authorized Layard to “search and export as you please”.

A reconstruction of the palaces of King Ashurnasirpal in Nimrud. Credit: Historical Photo Archive / Corbis via Getty Images

Layard did just that.

He sent the majority of the antiquities to London, where they now form the nucleus of the Assyrian collection of the British Museum.

The Assyrian Empire is referenced in the Old Testament, but its ruins had not been located. The monuments confirmed its existence and, to the missionaries, “proved that the Bible was real and not a work of fiction,” said Max Bernheimer, Christie’s international director of antiques. “It fueled the religious fervor of the time,” he added.

In 1859, one of these missionaries – Henri Byron Haskell – acquired three relief panels on behalf of his friend Joseph Packard, a professor at Virginia Theological Seminary, near Washington DC. The seminary provides postgraduate training to members of the Episcopal Church.

The panels were a steal – bought for $ 75 each, with most of that cost covering shipping.

Since their arrival, the panels have been on display in the seminary library and were viewed primarily as a scientific resource rather than works of art. A routine audit in 2017, however, revealed the value of the panels and skyrocketed insurance premiums to $ 70,000 per year.

This motivated the decision to sell one. The proceeds from the sale will support the conservation and study of the two remaining panels, and will benefit the seminar’s scholarship fund.

Ahead of the auction, the Iraqi Culture Ministry called for the sign to be returned to Iraq and activists had suggested a protest outside Christie’s during the auction.

A spokesperson for Christie’s said that while the auction house was “sensitive to requests for restitution from countries of origin,” law enforcement authorities had reassured it there was no no legal basis for a cultural property claim in this case.

The Northwest Palace was the architectural crowning glory of King Ashurnasirpal II, who reigned from 883 to 859 BC. When completed, it was the largest and most richly decorated building in the assyrian empire.

“Ashurnasirpal was the great kahuna, so to speak, of his age,” Bernheimer said.

The king expanded his territory by mounting a series of ruthless military campaigns and established a new capital in Nimrud – called Kalhu at the time. Ashurnasirpal equipped his new city with a citadel, defensive walls, four palaces, temples and townhouses, using the riches from his conquests and the labor of submissive slaves.

The interior walls of the Palais du Nord-Ouest were lined with more than 400 carved relief panels. Winged genius was the most common design, but some panels depicted the conquests of the Ashurnasirpal empire, religious events, royal hunting scenes, and courtly banquets.

Signs like the one up for auction were designed to “impress and overwhelm,” Bernheimer said. “Standing next to you, you feel the power,” he added.

Dominant and richly detailed, the sculpted figure is depicted in profile and the face of the muscular, bearded god resembles that of Ashurnasirpal.

A strip of text written in cuneiform – one of the earliest writing systems – crosses the center of the relief. It tells of Ashurnasirpal’s ancestry, his military triumphs, the extent of his empire and the construction of the Northwest Palace.

This inscription was “repeated on almost every panel that lined the palace walls,” Bernheimer said. It’s a flattering account:

This particular winged genius adorned a space archaeologists call the S room, which connected a central public courtyard to the king’s private chambers.

“It appears to have been an intimate area, rather than a courtroom,” Bernheimer said.

Along the walls, the winged genius repeated over and over.

“Everything that was going on in the S room,” said Bernheimer, “must have been seen as very important to demand so much protection from the gods.”

Works of art are exhibited at the Satrang Gallery

Shkolloli, director of the National Gallery, feels “threatened” by the works of art – Exit