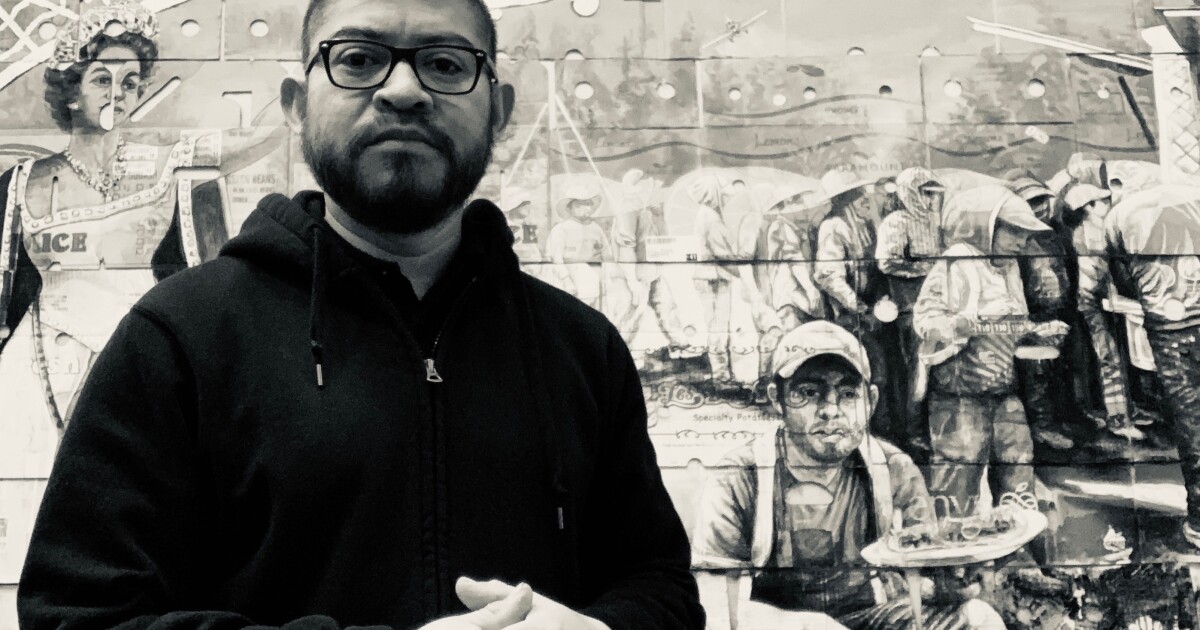 A new series of exhibits and programs showcasing Oaxacan culture will launch next week at Arte Americas in Fresno. KVPR spoke with Oaxacan artist Narsiso Martinez to learn more about the event. The interview has been edited for clarity.

Q: Hello Narsiso. Thank you very much for taking the time to chat with me. Can you explain the purpose behind Boom Oaxaca?

A: I understand that Boom Oaxaca will highlight the contribution of the Oaxacan community in the Central Valley in terms of food sovereignty, indigenous sovereignty and many other topics that will come out of the exhibit.

Q: The Boom Oaxaca website says this exhibit is not just about representation, but about recognizing communities reinventing their own futures. Can you tell me a bit more about what this means?

A: Well, for me, as an artist, when it comes to our future, it means “what else can we do? What do we want for our future? I work on the subject of agricultural workers, because I worked in the fields. But when I read the Boom Oaxaca statement, I immediately thought of the new generations of indigenous people in the valley. From my perspective and my own experience, I believe we can do as much as anyone else in this country. We can go to college, we can get degrees, we can enter politics, we can organize, we can be artists, musicians and film producers.

Q: I understand that you emigrated from Oaxaca and worked in the fields. How does your experience as a farm worker influence your art?

A: It has everything to do with my art. Before taking seriously the idea of ​​integrating farm workers into my art, I managed to go to school to learn [English] and get a college degree. When we had to do research, that’s when I really understood myself as an indigenous person, as a minority, as a person who struggled like everyone else in the fields and in the community. agricultural workers. So I decided to take up this fight and highlight the struggles of my colleagues. I was doing research while working in the fields, so I call them my colleagues. I thought it was important to highlight these struggles because through these struggles they contribute to our economy and to the country.

Q: Fresno is one of the most agriculturally productive regions in the country and is home to a large Oaxacan community. What does it mean to present this exhibition here?

A: Well, that’s really important. I feel like I show my art in institutions, like colleges, or go to galleries and museums. I bring these visuals to people who have probably never worked in the fields, right? And the goal was for them to realize, educate or maybe at least recognize that there are farm workers in the fields who work hard behind the food we produce every day. So being here in Boom Oaxaca has a different meaning because Fresno has a very large population of us, the Oaxacan community, and also farm workers. I hope many of these people go to the show and see themselves in the work. I want them to feel represented. I want them to be proud of what they do because what they do matters.

A: When I was a child, I almost never painted. I always drew, because it was the easiest, the cheapest. You get charcoal, pencils and paper. So when I went to [undergraduate] school, they taught me to paint on different types of supports. But in graduate school, all the knowledge I acquired during my undergraduate studies became a bit secondary. It was more about what we could say with art, not whether I could paint.

I had a hard time saying what I wanted to say, in my art, with oil painting. It was a bit frustrating for me. So I stopped painting and went back to what I knew, which would do me good. Before going to graduate school, I had worked on cardboard. I was inspired by a teacher. He had an exhibition, and he had a play on cardboard. I thought it was beautiful to use the cardboard tone as the subject’s skin tone. And so when I went to graduate school, and I was going through this little rough patch, I came back to that.

It was winter break and I found a box at Costco, a box of bananas. I took it with me and drew a banana man. I brought the box to my class and everyone was thrilled to see that all my dots came together. The fact that there was this overlap with the box design and labels was really significant. I was trying to talk about the differences in lifestyles between ranchers and farmhands. When I was in the fields, I saw these differences and wanted to incorporate them into the art.

The idea was that the owners of the ranch were represented by the labels and by the engravings on the boxes and my drawings represented the farm workers. But what I was trying to say became more universal, because I wasn’t just talking about the ranchers, where I work, but also the corporations, because they were hand in hand with the farm workers, and whether the lifestyles of corporations versus farmworkers were fair. It wasn’t all literally there, but people could ask questions. They could speculate.

Q: And will this work be exhibited at Arte Americas?

Q: Yes, we have two sculptures. And we have other designs, large designs that include farm workers. And of course, there are boxes of products, more precisely. You will see some of the labels. And also this last piece that I created specifically for Boom Oaxaca, which represents what we want for our future and what is possible for our future.

Q: This exhibition opens more than two years after the start of the pandemic. Has the pandemic influenced your art or the messages you hope to convey through your work?

A: It hasn’t changed, but it has created new ways to create art. Fortunately, I am still in contact with many of my colleagues. And often they share their stories through phone calls, pictures. And I use these images. And at least a few times I’ve actually created a piece that specifically talks about the pandemic and how these communities are still in the same struggle as before, even though they’ve been deemed essential workers. And that’s a bit sad, isn’t it? There’s been a lot of buzz around farmworkers, throughout the pandemic, and my biggest fear or concern was that after the whole pandemic was over, business was going to be business as usual. And it seems to be because now I see that nothing has changed. I am speaking at the level of state policy. And even at the local level, I often feel that agricultural workers are still not protected. There are still rules to protect agricultural workers, but they are not as enforced.

Q: What do you hope people will take away from the Boom Oaxaca exhibition?