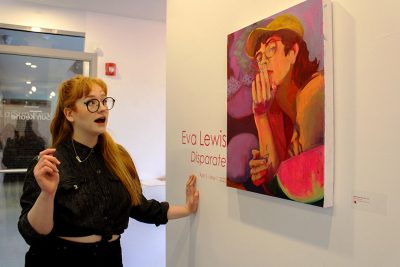 Eva Lewis, an upcoming Fine Arts graduate in painting from Boston University, is currently exhibiting her work at the LaiSun Keane Gallery in the SoWa Art and Design District near South Boston.

Lewis’ art generally focuses on people who identify with women in different spaces, such as nature or domestic spaces.

She said she draws inspiration from personal memories and many of her paintings may be loosely based on mythological stories. Lewis explained how Greek and Roman mythology often relied on the objectification of women for reasons of symbolism, which primarily set her apart from mainstream Renaissance artists.

“I’m definitely trying to reclaim those storylines and place these women in greater authority of the space they’re in,” Lewis said.

Disparate, the name of Lewis’s exhibition at LaiSun Keane, is the artist’s first solo presentation of this historical commentary. The gallery offers him the opportunity to discuss technique with many different people.

“I got a lot of responses from people like women tagging people who went on the show who said they were really work related and thought it was something they could see themselves or themselves in. see,” Lewis said.

Lewis’ work includes the use of oil and acrylic paints and incorporates lots of color. After coming from her hometown of Dayton, Ohio to BU, she was forced to employ “different ways of using color,” she said.

The gallerist, LaiSun Keane, also commented on these aspects, highlighting Lewis’ use of color. Lewis works with a lot of “hot pink and magenta or dark pink or red,” she said.

“All of these colors are so interesting to me because using monochrome is actually harder than using the whole palette right in the color spectrum,” Keane said.

Keane first saw Lewis’s work at a group show at another gallery across from LaiSun Keane and contacted her for a studio visit. Keane said she was impressed not only by her paintings but also by her personality and said “she is young and vibrant. It’s really fun to talk to her.

Keane said she was initially intrigued by Lewis’s perspective, being a Midwestern woman, but also found universal significance in her paintings.

“What worried me was more the representation of women. For me, she stood out for the body positivity of her subjects in her painting,” she said.

Lewis said depicting different body types actually helps develop the scenarios his paintings are based on.

“I may not have that type of body, but I know someone does,” Lewis said.

Thanks to the distortion, especially in the body proportions, Lewis said she liked having the ability “to be able to break the body if I needed to”.

Keane, whose gallery primarily focuses on non-traditional voices such as women and minority artists, said she likes to “stand up for emerging artists.” Keane said she appreciated Lewis’s art for its influence on the aesthetics of the Renaissance and Rococo art movements and the way she “used it to make her own representation”.

“I think every year we probably produce quite a few hundred graduates,” Keane said. “But they have no place to show themselves. So, as a gallery in Boston, I think it’s my responsibility and obligation to feature local artists.

Typically, Keane’s gallery puts on about nine to 11 shows a year, each of them lasting about four to five weeks.

“Art is actually a reflection of the society we live in,” Keane said. “The more we have access to art, the better off we are as people.”

Lewis’ exhibit premiered with an opening reception on April 1.

“It was a really wonderful and fun event because a lot of students from Boston University came out,” Keane said.

The following day, the gallery hosted an artist talk between Lewis and Lucy Kim, Associate Professor of Art, Painting at BU. Lewis has been a student of Kim for two years now, as she nears the end of her MFA program.

“Eva is a very promising young artist who really loves her medium [oil paint] and the discipline of painting,” Kim wrote in an email interview. “Joy emanates from his paintings.”

For advice to young artists, Lewis said it’s extremely important to be consistent.

“It’s hard to be consistent, especially in a world that asks us to do so many things and expects a lot of us,” Lewis said. “But whether it’s like just drawing in a sketchbook consistently or painting every night or every other day, just kind of practice. This consistency will help take you where you want to go.