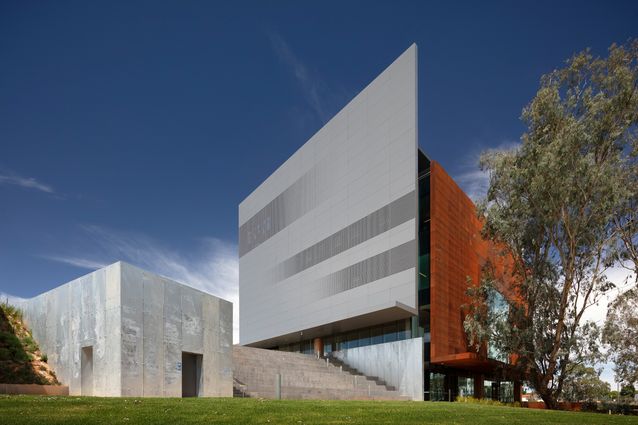 Denton Corker MarshallThe “Big and Small” Shepparton Art Museum, built on the land of the Yorta Yorta peoples on the shores of Lake Victoria Park, will open to the public on November 20.

Limited to a small footprint due to a bypass channel running through the site, the museum spans five levels vertically, making it the tallest building in the topographically flat city in the Victoria region. The architect, whose design was chosen in a design competition in 2017, describes the building as a “lighthouse” and a “sculpture” nestled in the landscape.

“The Shepparton Art Museum was a great competition to win because it represents such an important cultural contribution to a regional town like Shepparton,” said Denton Corker Marshall Founding Director John Denton. “Sitting between the lake and the main road to the city from Melbourne, it presents a surprisingly bold signal – a new contemporary building added to the fabric of the city. “

Replacing the old Welsford Street Gallery, the Art Museum will house more than 4,000 works of art in four main galleries. It will also include a space dedicated to children and a workshop space; a visitor information center; Kaiela Arts Indigenous Community Arts Center; an outdoor amphitheater; A coffee; and an event space for 150 people and a terrace.

The design is defined by simplicity of form and clarity of materials. On the facades of the building, four perforated L-shaped floating plaques hang in the landscape, referencing traditional Australian verandas. Three of the plates are in powder-coated aluminum, while the fourth facing the lake is in Corten steel rich in ocher red.

“From a distance, the plaques give hardly any indication of the interior life and wait to be discovered and explored”, notes the architect in a press release.

“At their base, they seemingly float unsupported above an open, visibly accessible and highly activated ground plane. Each plate is both an object in its own right and an integral part of the whole. The plates are grouped together, at different heights and contrasting materialities, to form a cubic composition on a scale comparable to the surrounding red river gums. Each facade plate becomes a canvas, superimposed in the wooded landscape of dappled light and shadow, with the possibility of transforming itself into a base for temporary installations or projection images.

The building connects to the surrounding parks via an area of ​​raised grass known as the ‘hill of art’. This raised form integrates the building services and the rear areas of the house while providing an elevated perspective for the museum cafe that connects directly to the park.

“The building is all about hope and aspiration, with a range of welcoming spaces and places designed to invite all members of the public to meet, appreciate and own the arts and culture”, said Rebecca Coates, artistic director and CEO of Shepparton. Art Museum.

“There is a play, performance and comfortable reflection with natural light and views of the landscape connecting people to the context and the landscape.”

The new building was funded by local, state and federal government, as well as philanthropic and community support.