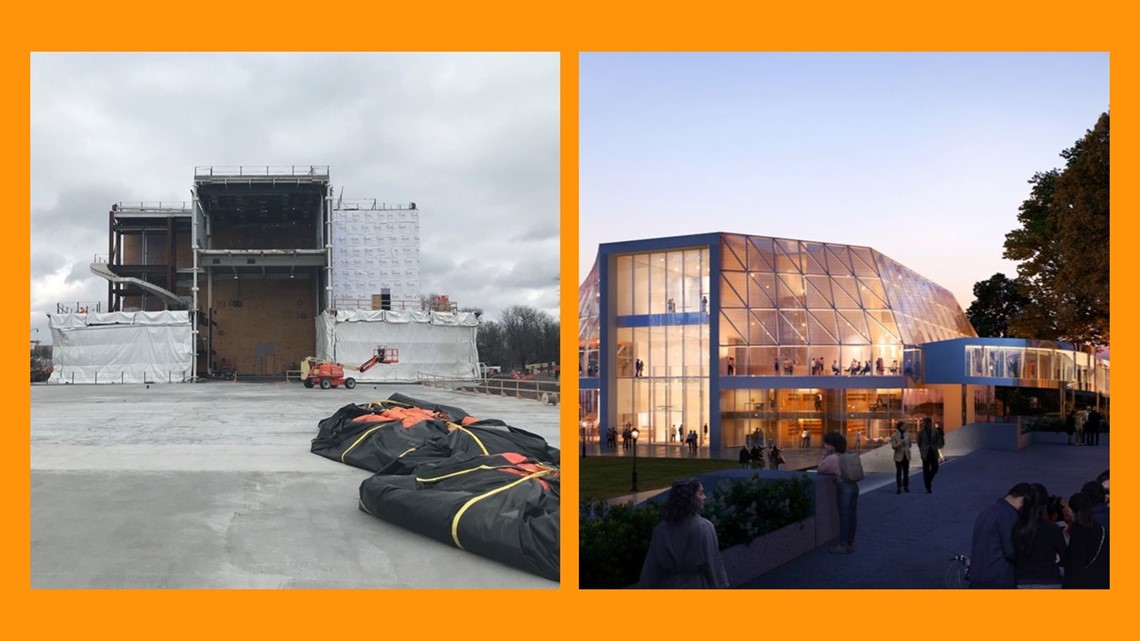 First Look: A Glimpse of the Buffalo AKG Art Museum

The ongoing transformation at the Art Museum on Elmwood Avenue is expected to be completed by spring 2023.

BUFFALO, NY – For decades, the museum known as the Albright-Knox Art Gallery was a peaceful and majestic setting to view the finished works of great artists. But nowadays it is now an active and noisy environment, where the sculpting is done by people using forklifts and other heavy equipment, rather than paint or clay.

The museum, which will now be called the Buffalo AKG Art Museum, will still be an active construction site for another year. So for now, director Janne Siren politely says “pardon our dust.”

“I know it can be a little disruptive in the early morning and late afternoon at times, and I apologize to our community for that,” he told 2 On Your Side. “But I hope our neighbors understand that sometimes it takes a little noise to get something new built.”

For the first time in 2022, Siren invited us behind the orange and white striped barriers that people driving Elmwood Avenue have grown accustomed to since construction began in late 2019. We took a peak at the progress until present, starting with the huge concrete slab that will eventually become a free public park.

“What we’re standing on right now is a parking lot,” Siren explained. “It’s the old car park, the old surface car park. It will be a green lawn, an artificial lawn. So you can imagine children playing here in the summer, snowball fights in the winter.”

Now imagine watching this scene, from the top floor of the new Jeffrey Gundlach building. It is named in honor of the man who donated $65 million to make the project possible. With never-before-seen bird’s-eye views of Delaware Park and the village of Elmwood, and an expansive indoor gallery, the Gundlach Building is built to impress, but not to intimidate.

“Museums can be somewhat alienating spaces,” Siren pointed out. “They look like these big buildings, and people might get an idea of ​​my place and my space, what is my role in this building?”

The Gundlach building will be glass enclosed this summer. It’s a design that Siren says was meant to invoke a feeling of welcome.

But this project does not stop at the new building and the park. Teams are also making major updates inside other buildings on the AK campus. With an initial budget of over $168 million, it is the result of the largest capital campaign for a cultural institution in Western New York history.

“Put it in these terms. We were a small to medium-sized museum by American standards,” Siren said. “We will be one of the largest art museums dedicated to the art of our time in the United States. The size of the new Whitney Museum of American Art in New York. The size of the Guggenheim, in terms of our footprint. “

Pandemic-related delays will eventually add between $12 million and $20 million to the total cost and six months to the schedule. When it finally opens in the first half of 2023, Siren says it will be a tourist attraction drawing art lovers to Western New York, but he wants Buffalonians to be the first to enjoy it.

“What’s important to the board and to me is that we open up to our community first,” he said. “So it’s not an opening day, it really is an opening season and we want our community to be the first to really celebrate the new museum with us.”