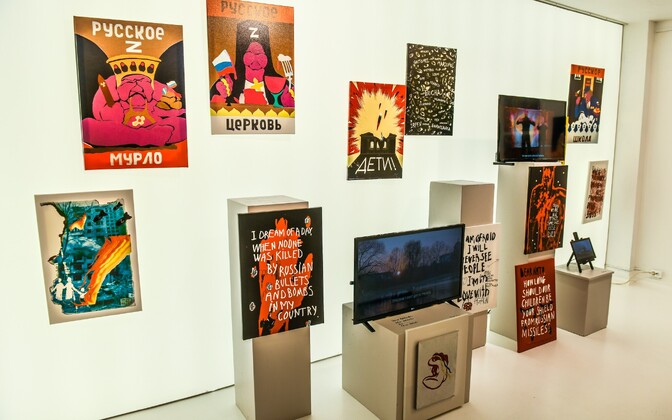 The exhibition was organized remotely by Viktoria, an artist currently still based in Ukraine, with the team of the Ukrainian contemporary art festival “Mycelium”. For security reasons, Ukrainian artists took part in the opening on Tuesday evening only by voice, as many of them live in regions of Ukraine currently occupied by Russia.

Speaking at the opening, Viktoria said Ukrainian artists are heroes in their own right, just like the local army, fighting in Ukraine and even internationally against a full-scale war – but they don’t. are not armed with weapons, but with brushes and pencils.

tARTu art gallery founder Raul Oreškin, who has corresponded almost daily with Viktoria since the start of the full-scale Russian invasion of Ukraine in late February, said the best part of opening this exhibition in Tartu is the fact that, despite the full-scale war now taking place in Ukraine, its artists can continue to work in their field, that is, to create art.

“No less important is the fact that the Estonian public can see these war experiences translated into art in a safe environment and support Ukrainian artists by purchasing these pieces,” he added.

“Each of these artists has witnessed crimes against humanity and strives to share their own story through the lens of their personal worldview in their own artistic language,” reads a description for “Trigger.” published on NOBA. “Each of these works is full of courage and determination to share secret feelings and the inner world that the war has upended. These stories may seem minor on a global scale, but they are very important – moreover, they are alive .”

The tARTu store raised funds on the Estonian crowdfunding platform Hooandja to pay for the exhibition. Oreškin noted on Facebook on Sunday that if the target amount of €3,200 had already been reached and even exceeded, every additional euro donated before the campaign deadline would be directed to a fund supporting artists in the city of Kherson occupied by the Russia.

By its conclusion at midnight the same evening, a total of €3,934 had been raised through the exhibition’s Hooandja campaign.