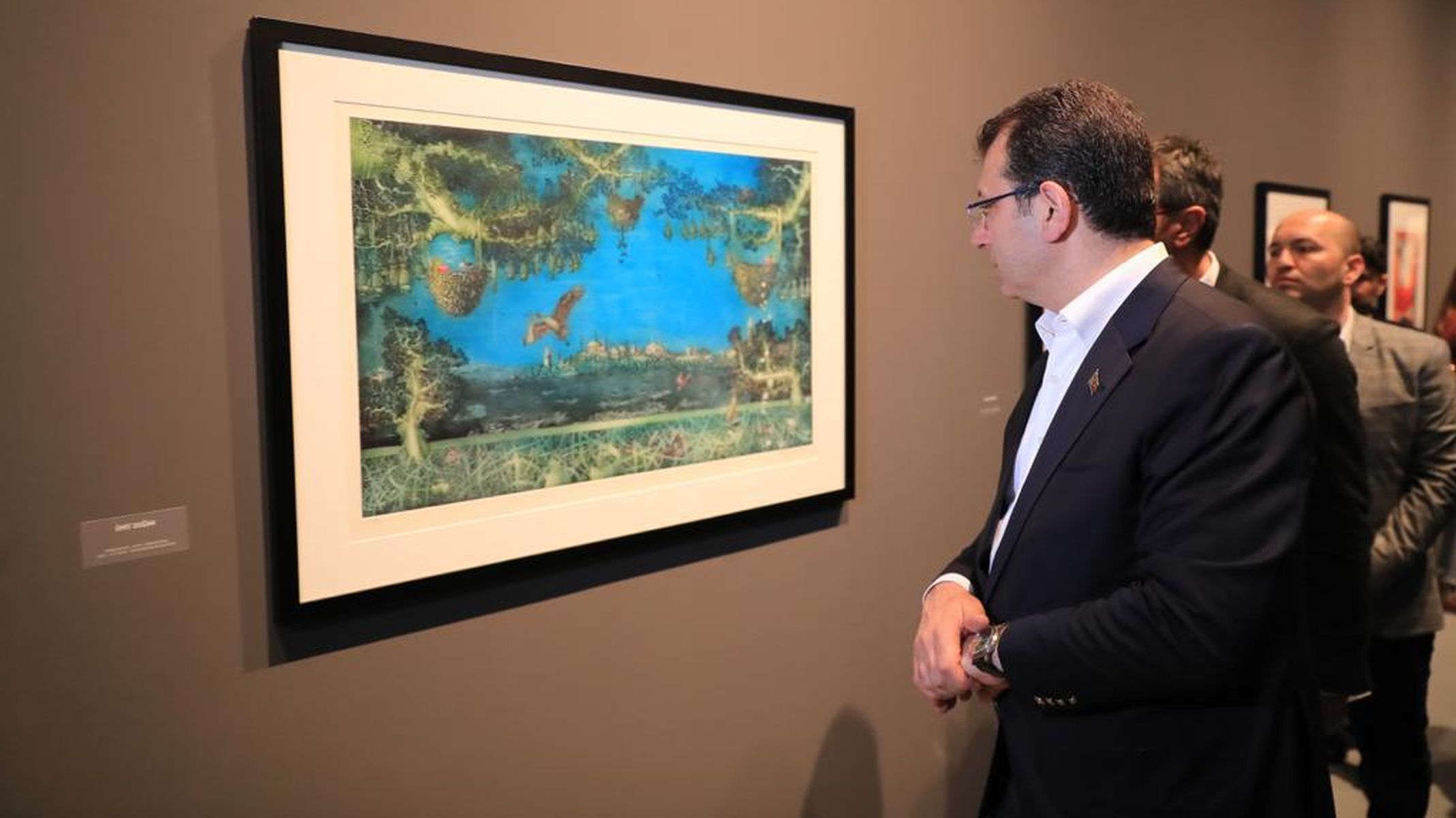 The IMM Istanbul Art Museum, which is scheduled to open in the Haliç Shipyard of the Istanbul Metropolitan Municipality, met art lovers at the Gazhane Museum with its first exhibition. Speaking at the opening of the exhibition, IMM President Ekrem İmamoğlu, “We are working hard at the Golden Horn Shipyard and we are bringing an art museum to the city. kazanWe are doing a very important special effort to climb.It will be the first art museum of Istanbul Metropolitan Municipality.The Istanbul Art Museum of our municipality will have achieved the function of a new cultural and artistic bridge connecting perhaps being the two oldest sides in town, and will have brought it to this level.

Cultural Spaces of IMM City to Residents of Kazan CityAs part of Turkey’s first printing museum, İMOGA’s donation to İBB met Istanbulites for the first time with the exhibition “Together” , which was prepared with a special selection of printed artwork. IMM President Ekrem İmamoğluBig names in the cultural and artistic community, IMM bureaucrats and many citizens attended the opening organized by . Mahir Polat, Deputy Secretary General of IMM, gave the opening speech of the exhibition. President of the IMM for the cultural and artistic activities of the city Ekrem İmamoğluThanks to Polat, then he gave the floor to the painter Süleyman Saim Tekcan. Tekcan said, “Today my Mayor of Istanbul Metropolitan Municipality, Mr. Ekrem, brought a museum to Istanbul with such a start. kazanI think the idea of ​​being killed is an event that will go down in history. I am an 82-year-old artist who had the chance to rub shoulders with the biggest names in Turkish art as an artistic educator, as a workshop owner. I don’t know how long I will live, but I am happy to have lived today. I am very happy that Istanbul has a great exhibition and a great museum.

Then IMM President Ekrem İmamoğlu took over. Stating that Istanbul’s cultural and artistic activities lift the spirits of its immediate environment and the world, İmamoğlu said: “We know that the fields of culture and art have particularly declined in our city in recent times, and it made us sad. In this sense, we have determined that one of the most important cultural infrastructure problems in the city is the concentration of culture and the arts in certain centers of the city and their concentration on commerce and consumption. For this reason, there are so many elements, areas and activities that people of all ages and walks of life can reach and interact with, as well as art, in Istanbul. kazanWe realized that climbing is an important responsibility. Because we knew very well that a mediatized cultural and artistic life is a very important factor in achieving a fairer, more democratic and sustainable urban soil in this city. Since the day we took office, we have tried to create cultural and artistic activities in the parks, squares and streets of the city. We are not satisfied with this. We have made a special effort to transmit the cultural feelings and artistic traces of the city to many points defined as “the inner city” and to bring them closer to society, and to enrich it with libraries and other areas. He used his expressions.

“With new museums, centers and galleries, we have become a local government that is a serious partner in the city’s cultural and artistic production.” Imamoglu said: “Furthermore, by doing this, we touch Istanbul’s very precious cultural heritages and memories and bring them back to the life of the city. KazanWe have carried out special studies, aware that they are a legacy and a trust.We actually brought 10 different exhibitions to Istanbul with the areas we created such as our showroom in Saraçhane, Mecidiyeköy Art, Cistern in Bebek, Galatasaray Square and the museum showroom Gazhane, which we are currently in. working hard at the Haliç shipyard and we are bringing an art museum to the city. kazanWe are making a very big and special effort to climb. This will be the first art museum in the metropolitan municipality. Istanbul Art Museum will have achieved the function of a new cultural and artistic bridge connecting perhaps the two oldest sides of the city.” Noted.

Noting that the “Together” exhibition is like a preview of the Istanbul Art Museum, İmamoğlu said, “Turkey’s first printing museum, IMOGA, and the very valuable founder of IMOGA, Süleyman Saim Tekcan , and her beloved daughters cooperated with us and this beautiful moment brought us this beautiful moment. It is a great source of pride for me. On behalf of the people of Istanbul, I would like to thank them warmly for their donation considerable to our municipality. Therefore, I would like to announce in advance that in addition to the works presented to the public here, 250 works will be presented to the public of the Istanbul Art Museum. Of course, I would like to point out that the different actors of this cooperation have given a very significant example in terms of contributing to the field of culture and public arts with a common motivation.I would also like to point out that our municipality is open to such collaborations and that we wish to collaborate with the act urs of all cultural and artistic life. At the same time, our citizens will have the opportunity to see the painting collection of our municipality, which has survived with the addition of valuable works of art since 1929, in the Istanbul Art Museum. Of course, we will enjoy bringing together the paintings of Fatih Sultan Mehmet and Suleiman the Magnificent, which we have added to our collection with special efforts, to bring together a special moment with Istanbulites and all art lovers.

A SPECIAL THANK YOU TO THE STAKEHOLDERS

Thanking all stakeholders who contributed to the Together exhibition, İmamoğlu said, “I would like to thank Mr. Markus and all other friends. As soon as we do not miss art and culture together in our lives, know it; we reach the highest values ​​of hope. We live in the moment. Personally, as a mayor who served in a very difficult period, I would like to express that one of the factors that gives me hope and raises this hope and this desire to produce at the top is that I draw my roadmap never forgetting my feelings of culture and art, communicating with them, having hope with them. I want. Therefore, I believe that 16 million of these city dwellers will have the same level of hope if we bring creativity, culture and art into the lives of 16 million people living in the city, from when our most young child begins to live the moment, to adults. Therefore, for the morale of this city and the desire to improve the quality of life in this city to reach greater heights, cultural and artistic activities should be present in life as much as possible. Otherwise, we will become truly hopeless, we will go to a pessimistic society that we will not give him an opportunity or a mass of people in this city who will tolerate him. I consider myself a very lucky mayor because he has accompanied us with these feelings towards the 16 million beautiful, precious, art-loving and creative people of this city.

It was established in 1974 as an artist’s studio under the direction of Süleyman Saim Tekcan to raise awareness of what original printing is in Turkey and to explain original printing to artistic audiences. kazanIt was transformed into the first museum of contemporary engraving in Turkey.

The workshops that Süleyman Saim Tekcan has set up in the field of original printing in Turkey have enabled artists to love this technique, to establish a link with this technique and to produce while respecting their own identity. The main objective of IMOGA, an institution born from the life and experience of Süleyman Saim Tekcan, is to open a horizon for artists to produce with the original printing technique and to bring them together with this technique. IMOGA also aims to ensure that works produced with original printing techniques reach art audiences. IMOGA began to serve in the building where it is located in 2004 in order to preserve, document, inventory and present its very important collection, then continue production in the workshop. Thus, IMOGA documented and formalized the works produced by the main artists of Turkish art using the technique of printing between 1970-2004 and created a memory of this period.

The exhibition “Together” from the collection of IMM Art Museum in Istanbul, which makes visible the unity of past and future, traditional and modern, personal and public, can be visited at the Gazhane Museum between April 3 and July 3, 2022.