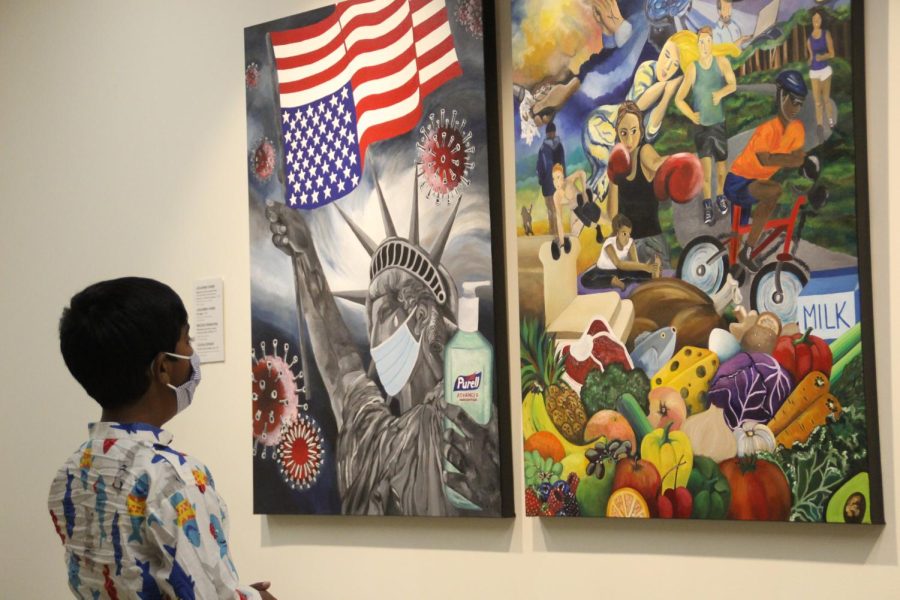 The 2021 La Pittura art exhibition – organized by Oakland University Organization of art and art history – is on display on the lower level of the Oakland Center (OC) until Sunday, October 24. The gallery features 18 works of art in total by 13 undergraduate artists and graphic designers who have graduated from OU.

The exhibit will run for an entire month, having had its opening night on September 24 in the Habitat Hall of the Oakland Center. The work comes from the Winter 2020, Fall 2021 and Winter 2021 semesters in Studio Arts thesis courses – students who were unable to have physical exposure due to the pandemic, which is reflected in the title of the 2021 exhibit “Thank you for holding.” ”

â€œLa Pittura chose this smart name, which is often heard after being put on hold during a phone call,â€ said John Corso-Esquivel, associate professor of art history at Davidson College and critic who served as the jury for the exhibition. â€œIn this case, the studio art majors were kind of suspended because their in-person thesis exhibitions were canceled due to COVID. While they had to hang on to display their work, they were finally able to show it off in a great group CO show.

While the title of the exhibition unites the artwork into one category, “the art itself had no theme,” said Hannah Rae, Spring 2021 graduate with a double major in studio art and art history. Rae was also the former president of La Pittura until the winter of 2021. She and her classmates had worked hard to revitalize the club in the fall of 2021, after its collapse in 2016.

The students decided on the themes of their works, each one unique according to their individual passions. For example, Rae’s piece titled â€œReaching the Unreachableâ€ was a self-portrait. In colored pencil on paper, Rae stretches his hand upward, representing a personal escape.

“[In the piece] I connect my thoughts on a quarantine world and my outlet for escaping traumatic reality, â€Rae said. â€œReaching out to the fantastic worlds we find in books, movies, and video games, but never really being able to grasp them because we’re stuck on the ground in our reality. ”

Another 2021 studio art graduate, Andrea Jones, presented two oil paintings, “The Firstborn” and “The Burden of Gaia,” both with personal meanings. “The Firstborn” is a painting of Jones, his mother and grandmother, the firstborns of the last three generations of their family.

â€œGaia’s Burdenâ€ is also on Jones’s family, as well as others who â€œunfortunately have wombs, with all the complications that come with it,â€ Jones said. The play is centered on a person lying in the middle of a yellow background draped in roses.

Normally, the jury would have taken place in person, but due to the pandemic, Professor Corso-Esquivel swore the show based on digital images.

â€œI grouped the works of art together in many different configurations, looking for combinations of works that would talk to each other,â€ said Professor Corso-Esquivel. â€œThe works that I finally selected could all ‘talk’ to each other.

Opening of the art exhibition: “body Horror Vignettes” by Lita b.