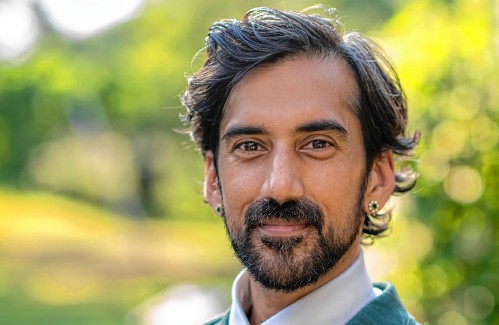 The son of Indian parents who came to the United States, Siddhartha V. Shah has lived, worked and traveled in many places over the years: Chicago, Baltimore and San Francisco; New York and London; India, France and Belgium; and more recently, New England.

It was in New England that he first felt a real sense of belonging, says Shah, curator and director of education and civic engagement at the Peabody Essex Museum (PEM) in Salem.

“My sense of identity hasn’t really been tied to any particular place or region, because I’ve lived everywhere,” he said. “But in Salem, you have this sense of deep roots…there are people here who can trace their families back over 350 years.”

Now Shah, who grew up in suburban Chicago, will seek to make connections in the Valley and at Amherst College in particular: he has been named the new director of the school’s Mead Art Museum.

In a recent phone call, Shah said part of the allure of coming to Amherst stems from the college’s significant efforts over the past two decades to bring in students of color, and especially students from lower economic means, on campus. According to the college, approximately 49% of American students at Amherst now identify as students of color.

“When I learned about this, especially the focus on economic diversity, I thought, ‘This is a place where I can really feel like I belong,'” he said. .

And Shah is also excited about the opportunities he will have to work with students and faculty at Mead, as he will be tasked with making the museum’s collection accessible to both groups in a variety of ways, such as asking faculty members to tap into Mead’s resources. when developing their curricula. It will work to boost student engagement in a number of capacities, from interns to docents to academics.

The challenge, he says, is to use Mead’s collection to “create conversations” with students about how these objects may relate to their own lives, or how they illuminate completely different histories, cultures and experiences from their.

“That’s how you build more cross-cultural understanding and awareness,” Shah said. “It’s not so much the preciousness of a particular object as the kind of stories and conversations you can generate about it.”

Shah, who started working at EMP in 2018 as curator of the museum’s South Asian art collection – one of the largest such collections in the country – is relatively new to museum work. In his twenties and early thirties, he was an art dealer and consultant, at one time running his own gallery, with branches in New York and Berkeley, California (he also earned a master’s degree in psychology Est -West at the California Institute of Integral Studies in San Francisco).

“I started to wonder how can I better use my education and my interest in art than to sell things to rich people?” he said. “I liked some of this work, but I felt there was more I could do…I started my PhD. program when I was 35.

He felt particularly drawn to his role as director of education and civic engagement programs at PEM, which he began leading in 2020. Although the Mead Museum is somewhat smaller than PEM, Shah says that he looks forward to using this smaller scale to develop close ties. to staff, students and faculty, and to the valley as a whole.

“The sense of community is really important to me,” he said.

In addition to working with students and faculty, Shah will oversee the museum’s collections, acquisitions, exhibitions and programs, while also serving as the museum’s chief fundraiser – and his past sales experience should come in handy in this role, he said.

In a statement, Catherine Epstein, dean and dean of Amherst faculty as well as a professor of history, said the college was impressed with Shah’s background, experience and “commitment to education, collaboration and expanding access to art on our campus and beyond. We look forward to seeing his vision at work at the museum and the new directions in which he is taking mead.

As a curator, Shah specializes in Hindu and Buddhist art from the Kathmandu Valley, the visual and material culture of Victorian India, 19th century European painting and modern Indian art. At EMP, he curated the installation of the museum’s new South Asian art galleries “to examine how colonial occupation shaped the ideas and perceptions of India that persist today,” the officials said. of Amherst.

In fact, Shah is not expected to start his new position at the Mead Museum until November 15, as he completes preparations for the exhibitions to be held at the EMP next spring, and works with his staff to ensure a smooth transition. following his departure.

“I felt like I couldn’t leave things hanging and unfinished,” he said. “But I’m really looking forward to coming to Amherst.