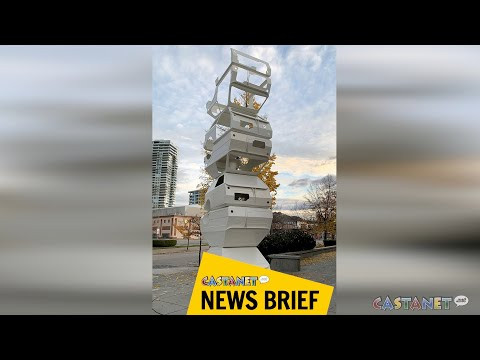 Pedestrians and motorists alike will experience a striking new sculptural work of art the next time they are at the corner of Water Street and Cawston Avenue in downtown Kelowna.

The sculpture is a project that the Kelowna Art Gallery has been working on for three years and has kept a secret until now.

â€œWe are thrilled to be able to share gold, silver and lead with the community,â€ said Nataley Nagy, Executive Director of the Gallery.

“We hope it becomes a landmark in the downtown public space and sparks a lively conversation about the visual arts in the community.”

The gold, silver and lead were acquired as gifts to the Kelowna Art Gallery‘s permanent collection in 2019 and are now installed outside the Gallery.

The 25-foot-tall sculpture features seven abstract bodies stacked vertically, soaring in a minimalist form. The cars, made from epoxy coated steel sheets, appear to deteriorate and disassemble as they go up, becoming almost unrecognizable by the time they reach their climax.

The artist behind the sculpture is Jed Lind whose work has been exhibited widely across North America. Gold, Silver and Lead was originally shown at the Toronto Sculpture Garden 30th Anniversary Exhibition in 2011.

â€œI’ve always been drawn to large-scale installations and sculptures for the way they immediately engage and confront the viewer,â€ said Jed Lind.

â€œWhat I like about public art is the variety or perspective of a work of art, which is very different from exhibiting in a gallery or museum. Ultimately, I’m not concerned with the take-out in the room, but whether it causes a pause, a reflection, or even a confrontation. “

Viewers can recognize the car frame Lind has reproduced in the monument. It is based on the bodywork of the 1979 Honda Civic intended to capture the spirit of its original design as a modern, yet humble, car of the future.

No Credit Check Loans: Are They Worth It Or Should You Look Elsewhere?