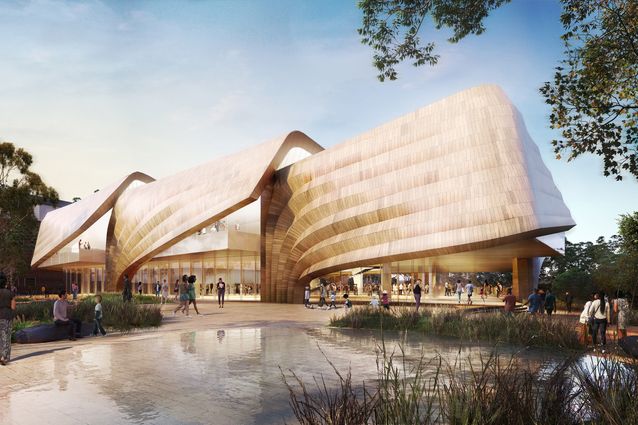 New vision for the Adelaide Museum of Aboriginal Art

Diller Scofidio and Renfro and Woods Bagot’s design for the Aboriginal Arts and Cultures Center (AACC) on the former site of the Royal Adelaide Hospital on Kaurna Lands has undergone a planning assessment.

The designs for the Center for Indigenous Art and Cultures depicting a series of basket-shaped shapes were released in early 2021 and have been refined for planning request.

Diller Scofidio and his Renfro partner Charles Renfro said a deeper and broader engagement with the Aboriginal reference group enabled them to embrace the values ​​shared by Aborigines and the forms of reference found in art. and aboriginal cultures.

“Fully connected to the landscape, the design integrates the lower ground level into the site and includes an exterior gallery cantilevered over the terraced landscape,” he said.

Design improvements to create a stronger bond with Country include creating the feature gallery completely outside and designing the building to ‘come more decisively from the ground with columns that appear to come out of the ground. ground “.

Oculus is the landscape architect on the project who will see a significant proportion of the site established with a combination of plants and vegetation, paving, walls, decks, seating and a range of water features.

Interconnected trails will wrap around the building and lead to smaller, quieter spaces across the site to allow visitors to get away from the city environment and immerse themselves in the scenery.

“This project is a path to reconciliation, an important moment in preparing for the future of Indigenous and non-Indigenous people,” she said.

“We are designing a vessel to contain – to nurture and care for – stories of the world’s oldest and most resilient continuing culture on earth. The design should speak to the whole nation and in particular to Aboriginal and Torres Strait Islander people across Australia.

Di Maria stressed the importance of collaboration with the Indigenous Reference Group.

“The role of the design team has always been to listen and translate the aspirations and ambitions of the ARG into a design response,” said Di Maria. “The architecture evokes a feeling of welcome for all visitors – especially First Nations peoples – and a connection to culture offered by the human experience.

Diller Scofidio and Renfro and Woods Bagot initially won Adelaide’s contemporary design competition for an art gallery on the same site before a change of government saw the gallery proposal scrapped and replaced with a center proposal. Aboriginal art and culture.