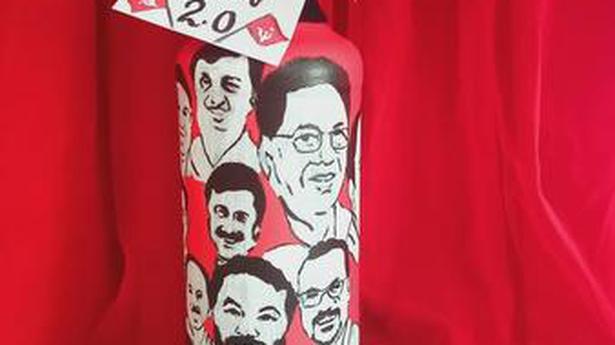 Twenty-one ministers, including the captain, jostle over a single bottle. A young painter from Thrissur drew on a bottle all the ministers of the Left Democratic Front government.

NG Gopika, a B.Com. graduate, made a skillful bottle painting artwork to draw the faces of all ministers of the second Pinarayi government on one bottle.

The eldest daughter of Gopakumar and Soumya from Chiyyaram, near Thrissur, entered the art world from a young age. She does pencil drawing, painting and wall art. It was the containment linked to COVID that led her to bottle art. She did her last job shortly after taking over the new ministers.

â€œThe most difficult to draw was the face of Captain Pinarayi Vijayan. Among the easiest were Ministers Veena George and K. Rajan, â€Gopika explains. All the ministers were drawn in one bottle.

When she sent the video of the work to Minister of Revenue K. Rajan, he agreed to meet with the artist. She presented the work to the Minister.

Gopika’s bottle painting on ministers in red and black acrylic will now take place in the Minister of Revenue’s office. Gopika wants to present similar work to all state ministers.

â€œInitially, I used to give bottle art to my friends and family. I put them on YouTube too. Little by little, people got to know my work. Now I am getting orders. She also does wall paintings on canvas. There are also buyers for them.

NGZ in public sale of uncollected works of art