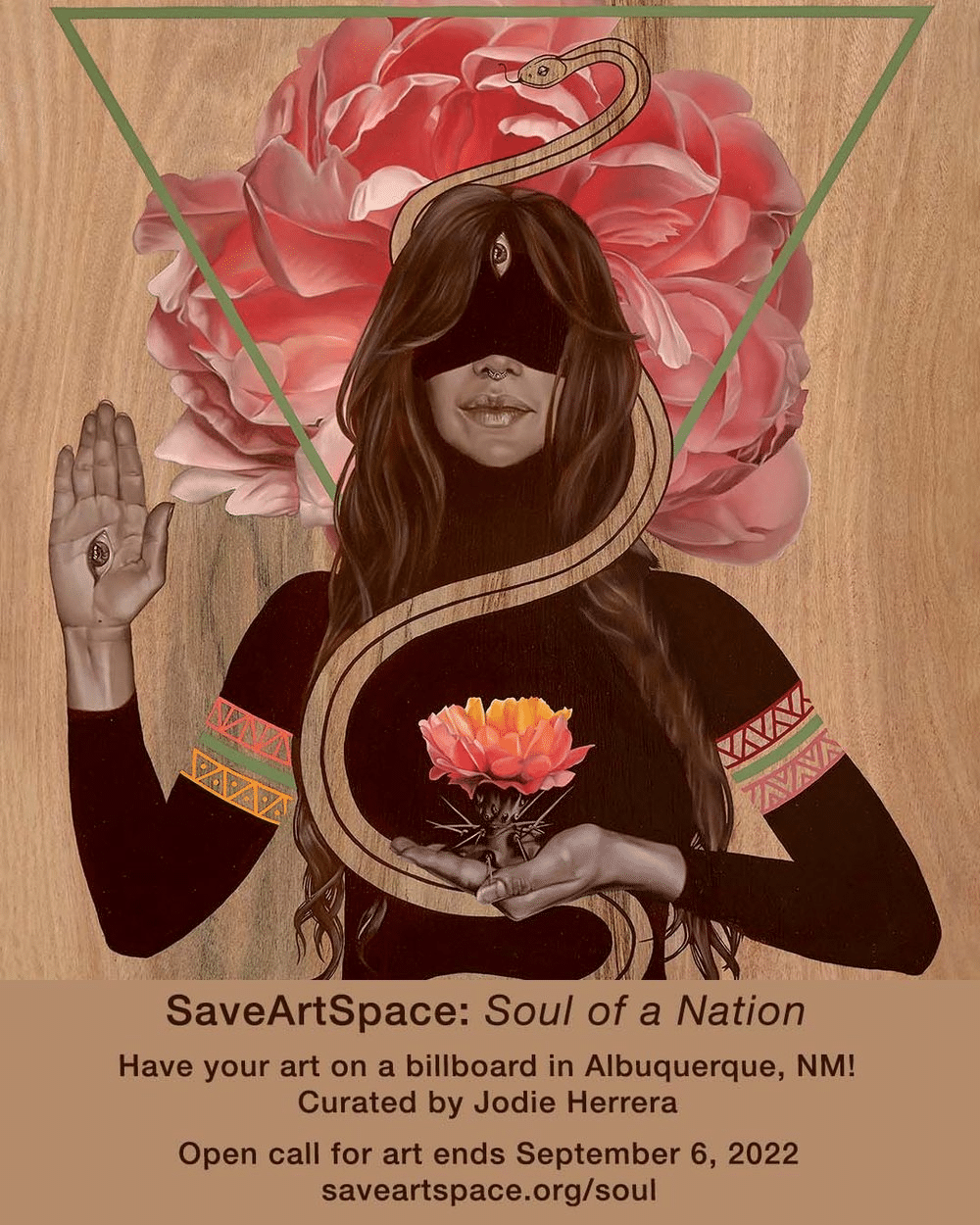 This open call invites creatives to apply for Soul of a Nation, a billboard exhibit exploring social justice issues that center BIPOC Womxn, transgender and non-binary people and fight for equity, justice and liberation. This may include, but is not limited to, reproductive justice, LGBTQIA+ issues, the Missing and Murdered Indigenous Women crisis, representation, ERA ratification, remastering, women’s empowerment, and more.

Ultimately, Herrera aims to connect and uplift marginalized people, like herself, while providing a platform for important issues around social justice and intersectional feminism and hopes her work can be a catalyst for positive change. .

SaveArtSpace invites artists of all ages and talents to submit their works between July 15 and September 6. This is an opportunity to place artwork on advertising space in Albuquerque.

The open call for art closes September 6. There is a $10 donation per image submission to participate, each donation is tax deductible and goes towards public art production. Each artist is encouraged to submit up to 10 images. The selected artists will be announced on September 26. The public art will be installed the week of October 24 in Albuquerque.

SaveArtSpace and New Mexico artist Jodie Herrera have announced an open call for artists to participate in the “Soul of a Nation” public art exhibit. Courtesy/SAS

Herrera was born and raised in New Mexico and has identified and worked as an artist all her life. She received formal training at the University of New Mexico where she received a BFA with honors and a major in painting in 2013. She currently resides in Taos, where she works full time as a realism oil painter. photo, muralist, illustrator, mixed media. Artist and curator.

She works locally on her main project, where she creates semi-photorealistic oil paintings depicting women who have persevered through trauma. Herrera takes great care of each story, building personal and supportive relationships with each of its participants. She uses the symbolism of their culture and personal interests to visually tell the painting and accompanies each piece with text that explains it in detail. She strives to celebrate the beauty and resilience of these women and hopes they can inspire others.

Women Across Borders, is an international arts and activism project. She works specifically with refugee and immigrant women and creates paintings that illustrate their personal journeys. She provides financial and emotional support to all of her participants and hopes to draw attention to the issues they face and have overcome, as well as to educate and activate others around the subject.

Her murals are meant to reflect the culture, history or mission of the space in which they inhabit. They are also meant to educate some people about impact or social justice issues that are relevant to the space and time in which it is being created.

Herrera was awarded “Best Visual Artist of 2017, 2018, and 2019” by Albuquerque The Magazine, and her art has been featured in venues such as the Art Archives of America at the Smithsonian Washington DC, The American Art Collector Magazine, Beautiful Bizarre Magazine, In seven Museums including the Denver History Museum-Denver CO, in many distinguished galleries including the Stone Sparrow Gallery in New York, the Maxwell Alexander Gallery in Los Angeles, the Fritz Gallery in Santa Fe NM, among others.

Founded in 2015 by Travis Rix and Justin Aversano, SaveArtSpace is a non-profit organization that works to create an urban gallery experience, launching exhibitions that address intersectional themes and promote a progressive message of social change. By placing culture above commercialism, SaveArtSpace aims to empower artists of all backgrounds and inspire a new generation of young creatives and activists. Since 2015, SaveArtSpace has installed the works of over 500 artists in over 900 advertising spaces in over 35 US cities, coast to coast and London, UK.