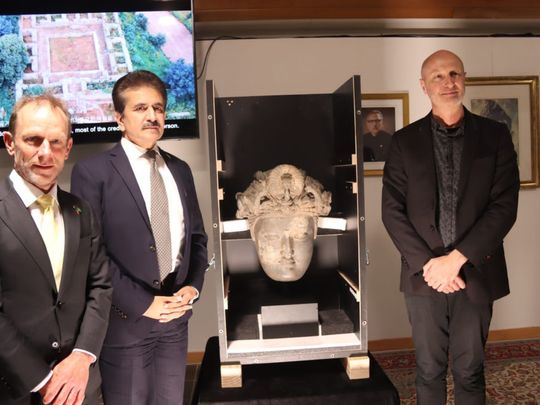 A statement from the High Commission said: ‘The magnificent historic artwork was illegally acquired and smuggled out of Pakistan by an international crime syndicate led by discredited art collector Subhash Chandra Kapoor, who is currently facing charges charges in New York and New Delhi for involvement in the illicit art trade.

“Kapoor sold the Gandharan Bodhisattva Head to the National Gallery of Australia in 2006. However, the gallery alienated it after discovering its uncertain legal and ethical status and association with past art as part of its project provenance research in progress. Therefore, the National Gallery of Australia, in close coordination with the High Commission of Pakistan, has decided to return this historic work of art to the land and the people to whom it belonged.

The Pakistan High Commission in Canberra is working closely with all relevant Australian departments for the identification and return of any historic artwork suspected of having been illegally removed from Pakistan.

Speaking on the occasion, High Commissioner Zahid Hafeez Chaudhry described the handover ceremony as a landmark event as it highlighted the importance of the legal and ethical aspects of the historic artwork. He added that it was a practical manifestation of cooperation between countries and institutions in this important field. He also stressed the need to further strengthen the international legal and ethical framework and cooperation against the trade in stolen, illegally mined, illegally exported or unethically acquired historic works of art.

The High Commissioner stressed that the criminal charges against Kapoor must be used to expose and prosecute international criminal syndicates dealing with historical works of art. He particularly thanked the National Gallery of Australia’s Provenance Research Project and thanked their entire team for making it possible for the historic artwork to return to Pakistan.

The ceremony was attended by senior Australian officials, including Ian McConville, Australian Chief of Protocol and Russel Storer, Head of International Art at the National Gallery of Australia. Buddhist monks, members of the diplomatic corps and academicians were also present.