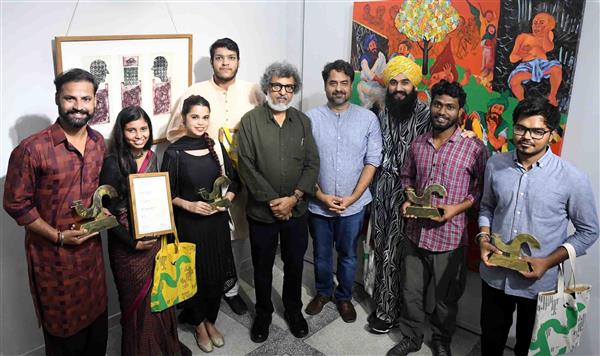 Art has the power to redeem. That was the tenor of the day as the 2022 Annual Art Exhibition opened on Thursday.

People from different walks of life thronged to the Punjab Kala Bhawan, Sector 16. The auditorium was packed as seven stars of the day took the stage to receive the awards.

The prize in the professional category went to Gurjeet Singh and Rahul Dhiman. The awards in the student category went to Jashandeep Kaur, Neeraj, Piyush Gupta, Sakshi Sharma and Suyash Goyal. The winning works were among 81 paintings, sculptures, mixed media and photographs exhibited at the 2022 Annual Art Exhibition at the Punjab Kala Bhawan Gallery. The Akademi received 351 works of art in the professional and student categories. This year’s jury included renowned names like Atul Bhalla and Veer Munshi.

The main guest on the occasion was National Award-winning filmmaker Gurvinder Singh. Engaging art students on his journey, he shared how it all started with a painting at his school. Rather than being born an artist, art somehow imposed itself on him and he exploited different mediums – painting, literature and cinema before becoming a filmmaker.

“Rather than having opinions about what is good or bad art, it’s about accepting to make the world a richer place,” Singh said. Diwan Manna, President of PLKA, hailed the power of art and the resilience of artists to help through the difficult times we had to go through. Gurvinder Singh’s two films – Chauthi Koot and Adh Chanani Raat will be screened. There will also be a conversation between filmmaker and film historian Ashish Rajadhyaksha at Dr. MS Randhawa Auditorium at 5:30 p.m. on September 22 and 23. —TNS