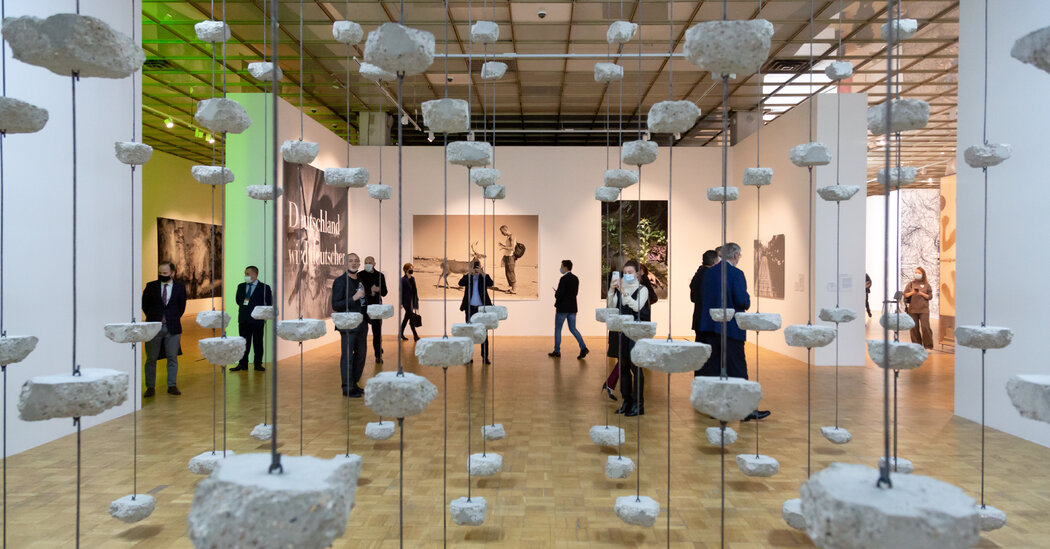 MOSCOW – With tensions rising between Russia and the West over Ukraine, the migration crisis in Belarus and the rise in natural gas prices, it might be surprising that President Vladimir V. Putin is godfather of an art exhibition celebrating European unity.

But here is his name, posted on the wall at the entrance of “Diversity United”, an exhibition that arrived in the new Tretyakov gallery in Moscow on November 23, after a four-month stay at Tempelhof Airport in Berlin, where it attracted over 50,000 visitors. The show runs in Moscow until March 13, then its next scheduled stop is Paris.

French President Emmanuel Macron and German President Frank-Walter Steinmeier are also the patrons of the exhibition, which explores notions of what Europe is. Bringing together the works of 90 artists from 34 countries, the exhibition deals with concepts such as fleeting borders, migration, historical trauma and more. Taken together, the art on display adds to an idealistic image of a continent united around liberal values, such as political freedom and human rights.

This is not a vision shared by the Russian government. Even the name of the show reveals crucial differences in perspective: In Russia, the word â€œdiversityâ€ has none of the connotations it has in the West around the inclusion of marginalized groups.

Yet for the artists involved – from Russia and elsewhere in Europe – the exhibition is a chance to show their work to new audiences who might be hard to reach otherwise. For the organizers, it is a diplomatic flex, and the opportunity to find common ground in a period of political tension.

The idea for â€œDiversity Unitedâ€ arose from Walter Smerling, arts administrator and cultural impresario who is the chairman of the Foundation for Art and Culture, a non-profit organization based in Bonn, Germany. Several years ago, Smerling organized a large exhibition of German art in Beijing (which attracted 750,000 visitors) and Chinese art in the Rhine and Ruhr regions of Germany.

Afterward, Smerling said in a recent phone interview, he realized he could orchestrate a similar exchange between the nations of Europe. â€œThe idea of â€‹â€‹democracy and freedom in Russia is a bit different from the idea in the rest of Europe,â€ Smerling said. â€œArt will not change the situation,â€ he added, â€œbut we can build a basis for dialogue in Moscowâ€.

Although the French, Russian and German presidents have no official obligations, Steinmeier delivered a speech at the opening of the show in Berlin. As for Putin: “We never saw Putin, we never spoke to Putin, he never emailed us,” Smerling said.

Instead, Smerling relied on her partner in Moscow, Zelfira Tregulova, general manager of the State Tretyakov Gallery (to which the New Tretyakov Gallery belongs), to negotiate the terms of the exhibition’s presence in Russia with the government, which oversees the museum.

For Russia, “it’s a publicity stunt to get a major exhibition like this,” said Jane Sharp, professor of art history at Rutgers University with expertise in Russian art and Soviet. “This is an opportunity for soft diplomacy, for Russia to show its willingness to participate in discussions on heterogeneity and human rights and individual freedoms, but in the context of Europe, which is moving these questions from Russia. “

When a visitor enters the exhibition in the New Tretyakov Gallery, one of the first works he sees is a row of colorful maps of Europe by Jan Svenungsson, a Swedish artist. At first glance, the maps look the same, but a closer look shows that the borders of countries change with each iteration. Across the room, a video by French artist Christian Boltanski recombines photographs showing sections of children’s faces from France, Germany and Russia into new composites.

The message is clear: we are all made up of the same fundamental elements. Biologically, this may be true. Yet Russia has never fully integrated into European politics and culture.

Payam Sharifi, a member of the art collective Slavs and Tatars, whose work appears in â€œDiversity Unitedâ€, said that the â€œelephant in the hallâ€ of the exhibition was the question: â€œDoes Russia do it or not? part of Europe? The answer “is never easy,” he said. “It’s both yes and no.”

Culturally, Russia shares traditions with Europe, but politically it stands out, said Ekaterina Muromtseva, a Moscow-based artist whose contribution to the show is a series of watercolors showing protesters holding empty signs. â€œOur government does not care about human rights at all,â€ she said.

Tregulova, the director of Tretyakov, said that when “Diversity United” was exhibited in Moscow, she and some art critics in the city noticed a trend: artists from outside Russia tended to s’ tackle the issues of the day – like Brexit, migration or right-wing movements across the continent – while the Russians have focused on concepts less related to the news.

Inclusion and identity are subjects of a sense of urgency in the West, and which are explored by many artists in “Diversity United”, but have no similar political implications in Russia: the discussions on fair representation based on race, gender or sexuality have not found a large audience here.

In Berlin, critics pointed out that despite the show’s name, those involved behind the scenes, such as members of the conservation committee, did not reflect the heterogeneity of European residents. “It is puzzling that the 12 members of the project’s advisory committee are of the ‘old white man’ species,” Ronald DÃ¼ker wrote in Die zeit, a German newspaper, in June.

Responding to this criticism in the interview, Smerling said, â€œWhen we started out, we needed help making contacts in the business world, in the political world – because we need the support. And, therefore, I asked people I knew.

â€œIt would be great to have women who could help us,â€ he added. “But I couldn’t find them.”

Ahmet Ogut, a Turkish artist who divides his time between Berlin, Amsterdam and Istanbul, said he withdrew his work and name from the exhibition on July 12, about a month after opening in Germany, due to several apprehensions. â€œAre we here just for our names,â€ he said of the artists involved, â€œor is it really about diversity?

Similar criticisms have not been raised in the mainstream Russian media. But Yelena Kalinsky, an scholar at Michigan State University specializing in modern and contemporary art, said the curators of “Diversity United” could have provoked an introspection with the good works of art.

“Russia is a former multi-ethnic, multi-religious, multi-lingual empire, and there are artists working on these issues,” Kalinsky said. “But the state itself isn’t really interested in these things.”

Despite the missed opportunity, Kalinsky said, the cultural exchange offered by this exhibit was still valuable. “It’s not entirely cynical to look at these diplomatic exhibits and see them as a facade for this rosy idea of â€‹â€‹cooperation – but they also have an effect, which maintains contact,” she added.

During the days of the Soviet Union, when Russia was closed to the West, there were moments of exchange through the Iron Curtain, including a historical exhibition from 1979 “Paris-Moscow, 1900-1930Which showed in both cities and several exhibitions of Western artists like Francis Bacon, Gilbert & George and Robert Rauschenberg in the late 1980s in Moscow.

Ultimately, Kalinsky said, one show won’t change everything. But “to have contemporary art institutions in Russia and outside of Russia that actively enter and work with Russian artists,” she added, “is the most important thing.”