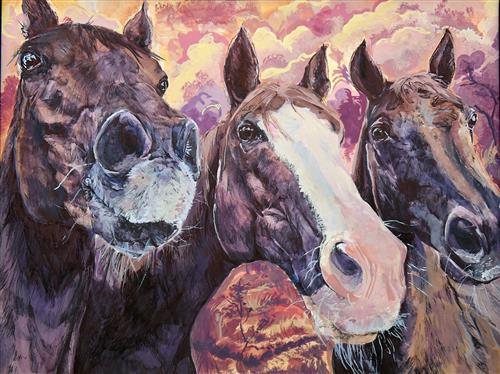 Three Cy-Fair ISD students took part in the Houston Livestock Show and Rodeo Art Program and won nearly $ 50,000 between them at the school art auction last month, a press release from the district said.

Ravine Cohen, a student at Hamilton Middle School, received one of 120 Museum of Fine Arts scholarships at Glassell Junior School of Art and won the Best of Show award. Cohen’s painting, â€œSunkissed Stallions,â€ sold for $ 30,000.

Amy Muery, a junior from Jersey Village High School, sold her painting “Laying Hen” for $ 12,000 and won the gold medal in the high school division of the School Art Program.

Student art will be featured in the Texas calendar

Students from Cy-Fair ISD elementary and secondary schools have been shortlisted for the 2022 Treasures of the Texas Coast Children’s Art Contest.

â€œI would like to thank the art teachers at CFISD for encouraging their students to submit entries for the Treasures of the Texas Coast children’s art competition,â€ said Lee Carrier, visual arts coordinator for CFISD, in A press release. â€œWith our community spending more time outdoors and on the beaches, this contest was a great activity for students to be aware of keeping their neighborhood and community clean. When CFISD students use their artistic talents to create environmental awareness, it is a laudable act to be recognized for and I am proud of the participating students and those who received an award.

Boucher received the $ 500 TASSP Teens Serving Texas Scholarship, recognizing seniors for their community service and leadership. Bell was named to the Academic Excellence Team of All States. Bell also received a $ 500 scholarship and was recognized for his SAT, GPA and Essays scores.

â€œWe are so proud of Reggie and William,â€ said Traci Underwood, Bridgeland Director of Education, in a press release. â€œThese two awards are a testament to the academic excellence and community involvement these Bears exemplified during their time in Bridgeland. To be recognized by TASSP is an extraordinary honor.

Three students from Lone Star College-CyFair received the Student Research Award for nearly $ 1,000 in prizes for their honor class projects. All three were nominated by the faculty.

â€œGiven the tremendous effort students put into their research, writing, and classroom presentation materials, this award goes one step further by recognizing the effectiveness with which students communicated information found in library books and online databases in their research projects, â€LSC-CyFair director of library services Susan Green, said in a press release LSC-CyFair. â€œWe are very proud of the quality and the stimulating projects that our students produce each year. “

Large company Diana Tran won first place for her environmental science project â€œCreating a Cost-Benefit Analysis Guideline from Ecological Economics: How Can this be Applied to Landfill Mining? Joseph Flores won second place for his article in English “Submit to Sin: Contextualizing the Roman Empire in Augustine’s Detailing of Sexuality in Confessions”.

â€œSeeing my research that I worked hard on and lost sleep on is very rewarding,â€ Lentz said. â€œThrough the lessons learned and receiving this award, I not only gained confidence in my research skills, but I learned to love the research process. “