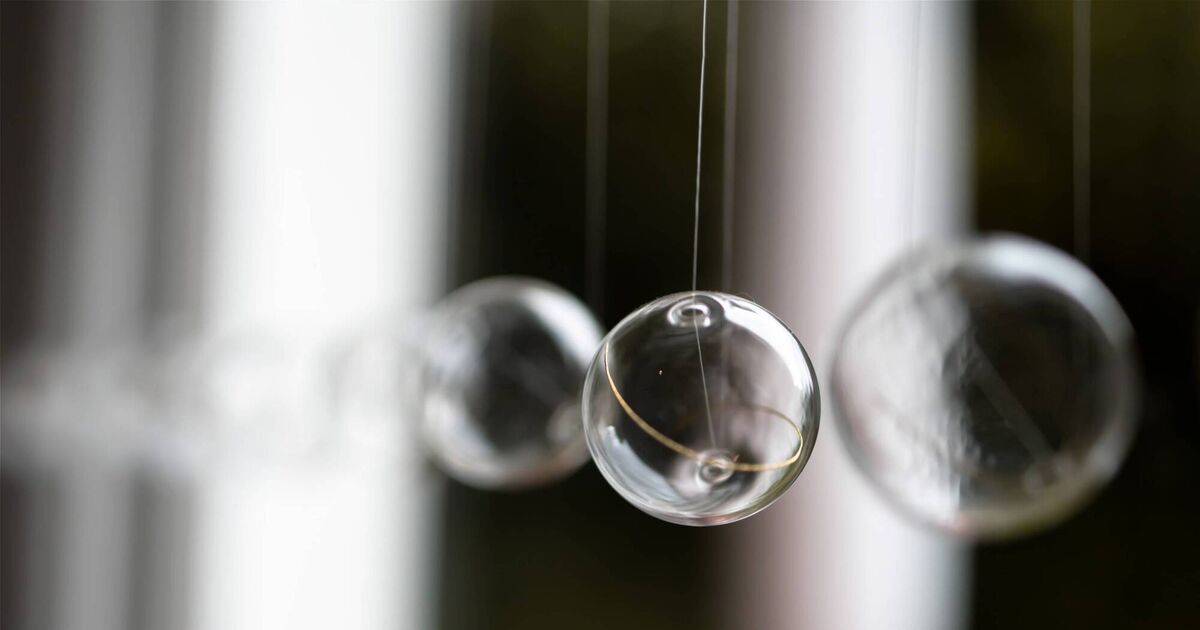 The artwork was inspired by the death of mum

As a community doctor at St Mary’s Primary Care Center in Gurranabraher, as well as an artist based at Sample Studios in Churchfield, Edith O’Regan wanted to create Covid-related art.

Along with three other artists from the studios (John MacMonagle, Samir Mahmood and Amna Walayat), she is presenting her work in a collaborative exhibition titled Braid at the Lord Mayor’s Pavilion in Fitzgerald’s Park until October 1.

Edith, from Youghal, has two rooms on Covid themes, sparked by the death of her 78-year-old mother from Covid in April.

She also wanted to make a coin commemorating the 22 health workers in Ireland who died as a result of the pandemic.

In addition to remembering those who did not survive, Edith also wants to try to console “those of us who mourn all that has been lost”.

In his room, Last Breaths (one requiem), 22 mouth-blown glass spheres containing pure gold thread on monofilament, as well as a QR code with a video link, hang online. Each small sphere represents a deceased health worker.

“I wanted to do work on Covid. We were all redeployed to public health and the world collapsed,” says Edith.

“I was doing complex contact tracing, so we were calling families where there may have been residents in nursing homes. Complex cases were horrible. The bereaved families were the most grieving I have ever spoken to. It was terrible.

Edith’s other Covid piece is a wooden box with hand dyed indigo silk thread and pure gold thread. The exhibition measures 50cm x 50cm. There are 604 strings in the box.

“All other pure gold cords are equally important to bereaved families.”

Edith used what is called a hyperbolic paraboloid for her artwork.

“It’s a way of bending straight lines. You arrange the lines to give you a curve. I find this idea interesting. You can see a circle in the middle, within a square. It’s as if our sorrow is limited but also, our life is limited. There is a mess within the order which is kind of what life is like.

Juggling between a scientific career and an artistic career is a rather special duality. And Edith feeds on it, treating her art as a profession in the same way as medicine. She works primarily in the area of ​​child development, doing assessments on children of concern for their development.

“I always wanted to do medicine. Mom and Dad tried very hard to talk me out of it. My father said it would be a very difficult life for a woman. That’s not something you say to a 16-year-old kid!

Medicine appealed to Edith because it has always been “a bit restorative”.

“There’s also the science element, that sense of how things work. I’ve always been interested in how the natural world works.

Along with that, Edith always had “a compulsion” to do things.

“My mother knitted and crocheted, my grandmother was good at making things. I’ve always knitted and sewn and embroidered, or baked cakes. I’m never happy unless I have a plan to do something.

Edith fell into textiles and took evening classes at the Crawford College of Art and Design.

“I went from functional objects to artistic objects.”

At Loreto de Youghal high school, Edith made art like everyone else.

“My friend who sat next to me was incredibly talented and went on to study art at Crawford. Drawing was what art meant back then. If you weren’t good at drawing, you wouldn’t weren’t an artist.

Edith says her drawing is “not great”. But she has the artistic instinct of creation.

“I’ve always been really good at doing things with Marla and clay. But drawing never really caught my interest. The first time I opened a tube of paint, it was all for me.

She was hit. It happened in Edith’s late thirties. She then had three daughters. But despite being a busy mother, she was determined to pursue art.

Edith joined Sample Studios in 2017 after painting for three or four years before. She then took lessons with local artist Cora Murphy, learning to use oil paint and old wax.

“Cora has been very supportive of me. She said I needed to have exposure. So I did a show at the Quay Co-Op in 2018. It was the first time I had my art displayed on a wall for people to see.

Praising the accessibility of the Quay Co-Op for a fledgling artist, Edith says she made a deal with herself when she joined Sample Studios. The deal was to put money, time and effort into his art.

“But it’s not a hobby. It’s a job. That’s why I’m exhibiting. I can’t hide my work under the bed. He has to climb on the walls.

Edith also exhibited with two other Sample Studios artists at St Peter’s on North Main Street in 2019. She also participated in an exhibition at the same location in 2020 in conjunction with the Cork Folklore Project. Since she began her artistic career, Edith has sold quite a few pieces.

Collaborating with her three fellow artists on the latest exhibition, the focus was on individual conversations and exploring their shared artistic experiences. These sessions were mostly online due to the pandemic. John’s day job is to run the graphic arts company Raven Design with his wife. Samir, originally from Pakistan, gave up medicine to devote himself to art. Amna, also from Pakistan, is influenced by feminism.

John’s exhibits at Braid are mostly images of black garbage bags in different contexts, including a small sculpture of three such bags hanging from the sparse bare branches of what he calls a Becket tree. (This is the kind of tree that is more or less the setting in the productions of Waiting for Godot.)

John was inspired by the death of his mother and what she left materially.

“When my mother died, it took us weeks to empty our family home. Suffering from dementia, she spent the last years of her life in a retirement home. After the funeral, this room also had to be cleaned – so that the next person could move in. “Everything fits in three black bags,” my sister said when I called her that night. Three full bags.

Samir writes that his digital collages and image transfers tell the story of a new beginning after migrating to Ireland from Pakistan. “The titles of the artworks are based on the growth and transformation of the queer body and mind in the new contexts, resisting or reshaping memories and assisted experience.”

Amna writes that in the collaboration, “I had the chance to continue my journey into hybrid cultural experiences. These small Indo-Persian miniatures are the result of the conversations that we weavers have had and with the work of each other, we have been inspired. I connect the feminist aspect of my work/life with the work of my co-artists and their experiences.

Edith’s work is a way “of trying to show grief and loss. We have all suffered but life is getting back to normal. You think you’ll never get over heartbreak, but you do. There will be another day when the wind will be perfect. (Edith has a third exhibition titled A day when the wind is perfect.)

She says that although heartbreak will never go away completely, there will always be good days. And she adds that most of us will leave little behind when we die, other than the memories others have of us.

“That’s why you have to live life when you have it,” Edith says.