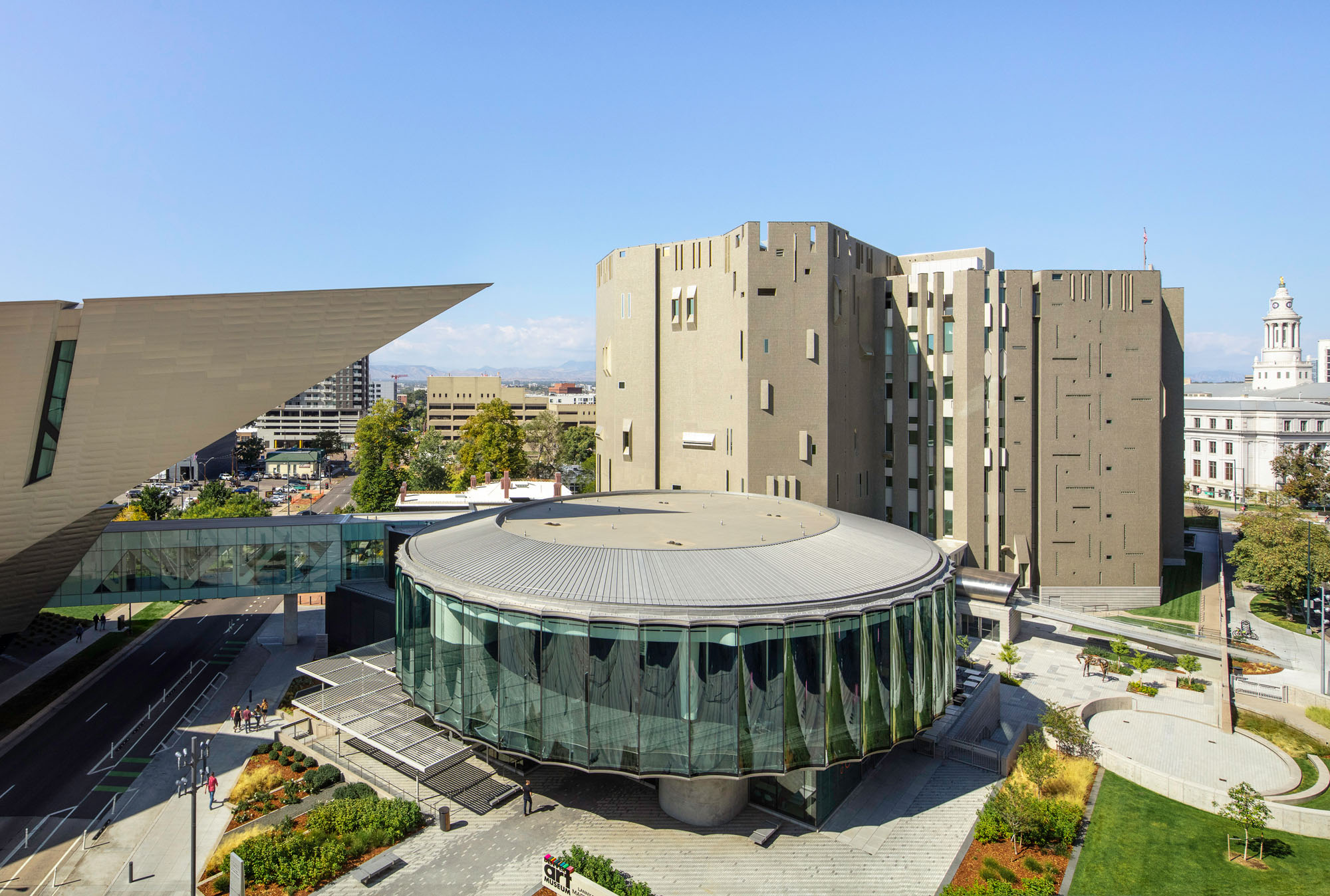 The Denver Art Museum gets a makeover

Fifteen years later, Libeskind’s gesture seems out of step with the moment. The tilting walls and sloping floor plates make its galleries awkward and inflexible. (Some of these spaces are currently closed for repairs.) Although the structure is connected by a bridge to the Martin building and its pointed bow towers over a new 50,000 square foot visitor center, this is no longer the event. main.

For Machado Silvetti’s Jeffry Burchard, the challenge for the Welcome Center was to rebalance the power dynamics, not only between the two museum buildings, but also with Michael Grave’s Central Library, a multicolored postmodern affair on the same block as the Ponti. “They are all objects for themselves,” he noted. Rather than trying to find unity between these original figures, his team added a fourth to the composition: this two-story elliptical pavilion clad in crenellated glass 25 feet high.

According to Burchard, the shape pays homage to an oval-shaped auditorium designed by Ponti for the site, but never realized. It’s a likely lost reference to most visitors, but the curved shape, complemented by a sunken sculpture garden, serves as a central pivot for a constellation of stars. Architecturally, the building speaks a language of hospitality rather than a signature design. Details are neat and functional with a dash of Ponti-esque motifs. It’s logic. Contemporary museum culture is as much about attracting visitors, welcoming donors and leading school groups as it is about expertise in high culture. So necessarily, if not an obsequious touch, the visitor center houses the most public parts of the museum: lobby, ticket office, cafe, a restaurant on the ground floor, and a community lounge / event space large enough for 650 people seated. – dinner above. From the inside, the sweeping of its scalloped windows offers a view of the eerie neighbors.

A utility leg extends from the new entrance pavilion and plugs into the side of the Martin building, like a walkway meeting a mesa. The move is so concrete that it hardly needs a mention, but it skillfully sets up a series of updates in Ponti’s building. The galleries were gutted there and insulation was added to the exterior concrete walls. The building’s vertical circulation was still slow and insufficient, so in a feat of structural engineering, two new elevator shafts were cut into the post-tension slab and the old elevator technology was replaced. Inspired by another Ponti project not built for a rooftop oasis, the architects recovered the roof and added more than 9,000 square feet dedicated to the Petrie Institute of Western American Art, making way for two outdoor terraces with views of the Grand Denver and the Rockies. None of these enhancements are a particularly extraordinary design, but they go a long way in improving the quality of the artistic experience.

The architects also refitted the Bonfils-Stanton gallery on the first floor of the Martin building. They cut the original double-height space in half with a new floor plate to produce 7,750 square feet of new design gallery space on its upper floor. Visitors now walk directly from the Visitor Center into these design galleries, where they are conveniently greeted by a temporary exhibition of Ponti’s work, including models and drawings. The retrospective, which also includes a catalog, sets the Denver Art Museum within a work of meticulous objects, from silverware to skyscrapers.

A drawing of an unfolded elevation sketched in graphite and red pencil hangs on a wall. It reminds us that the idiosyncratic logic of the architect of the diamond and coin windows is a musical score of light and dark slits, not defensive. In his catalog essay, “The Six Design Principles of Gio Ponti,” architectural historian Taisto H. Mäkelä writes that the openings were meant to allude to works of art hanging in galleries as a modernist expression of inside outside.

And yet those original windows were problematic. Uninsulated, they were too hot, too cold, and too humid with condensation for a controlled museum environment. Curators would either avoid them or block them out of the exhibition space altogether. The renovation replaced all of these windows, preserving their unique shapes while improving their performance. During the process, the architects discovered unknown sockets in the thresholds that were intended for decorative lighting but abandoned due to the cost of electricity. Restored with low wattage LED lights, the windows form nocturnal patterns on the facade.

In addition to the Bonfils-Stantons, all the galleries in the Martin building have been completely redesigned and reinstalled. Each collection has its own floor and the curators have worked with different designers with varying degrees of success. In the Gallery of Indigenous Arts of North America, dark purple and brown walls and an exposed ceiling grid create a dramatic setting for the vast collections of contemporary Indigenous crafts and art spanning 20,000 feet squares. Denver-based Fricker Studio’s design is theatrical, but installation and curation by John P. Lukavic, Indigenous Arts Curator Andrew W. Mellon, and his team eschew the didactic and other tropes that plague history museums. natural. A 19th-century Lakota dress is treated the same as a 2014 painting by Wiyot artist Rick Bartow – both are works of art comprised of skill, meaning, and beauty.

Martin’s new second-floor architecture and design galleries, produced by OMA New York and curator Darrin Alfred, are disappointing. Unlike the galleries on the upper floors, which use color and lighting to set tone and narration, the predominantly white space dissolves into emptiness. The reflective walls supposed to create playful linings have the unfortunate effect of amplifying the presence of the grid of the acoustic tiles on the ceiling. The collection on display is also a bit dated, perhaps targeting a more populist audience. Do we really need to see another set of psychedelic concert posters or a plump La Mama chair by Gaetano Pesce? Yet a small arrangement of photographs and drawings from Herbert Bayer’s Earthworks – sculptural mounds created for the Aspen Institute campus from the 1950s – are an unabashed surprise from the archives. The only thing missing is a phrase in the didactic wall text drawing a parallel between Bayer’s forms and indigenous mound culture, which could connect the exhibits across the floors.

Noteworthy is the Creative Hub designed by Mexico City-based designers Héctor Esrawe and Ignacio Cadena. Set in an airy double-height gallery on the ground floor of the Martin, the installation of flexible furniture and children’s amphitheater seating has a graphic quality that speaks Ponti’s geometric language with an oversized pop sensibility.

Aging buildings of late modernity and brutalism are often threatened with demolition because they are no longer to the general taste and are difficult to update to meet new uses or contemporary demands. With the Martin Building, it is a real joy to see the sensibility of the Italian architect reincarnated by the museum and the city, in the grounds and even in the pretty names of the restaurants: the Ponti restaurant and the Café Gio. As staff move into the building, it is hoped that curators and exhibition designers will push the possibilities across their renewed square footage. The current designs of the exhibition, beautiful as they are, are a bit traditional. But the discreet renovation of Machado Silvetti and Fentress offers a stretched canvas for even more daring experimentation.

What remains unanswered is the Hamilton Building in Libeskind. The new pavilion recognizes this awkward neighbor. But cold impartiality is a weak tool to mitigate a heavy presence. Outside of the current renovation, the nearly two-decade-old sculptural edifice is now the outlier. As he gets older, will he fall out of favor and receive nasty nicknames? (Spike, maybe?) Or, like Ponti’s design, will it be reborn half a century later?

M +, the world’s most controversial and largest new art gallery in Asia, opens its doors