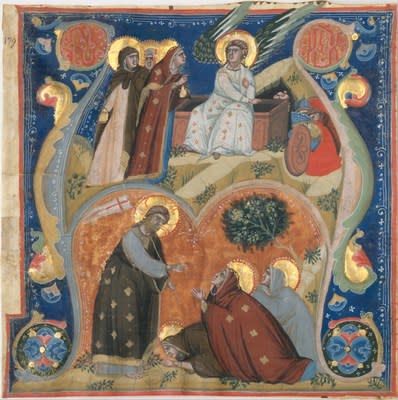 NASHVILLE, Tennessee., September 14, 2021 / PRNewswire / – The Frist Art Museum presents Medieval Bologna: art for one University town, the first major museum exhibition of United States focus on medieval art made in the prosperous city of Bologna, in northern Italy. Designed and curated by the senior curator of the Frist Art Museum Trinita kennedy, the exhibition of illuminated manuscripts, paintings and sculptures will be presented in the upper galleries of the Frist from November 5, 2021, through January 30, 2022.

The nearly 70 objects in the exhibition span from 1230 to 1400, from the first great flowering of manuscript illumination in Bologna to the beginnings of the construction and decoration of the ambitious Basilica of San Petronio in Piazza Maggiore. from the city. On display are numerous illuminated law books, fascinating for their distinctive layout and iconography, as well as for their remarkable size and weight. The works come mainly from American libraries, museums and private collections, including the J. Paul Getty Museum, the Library of Congress, the Metropolitan Museum of Art, the National Gallery of Art, the New York Public Library and Princeton University Library. Loans are also sought from the Museo Civico Medievale in Bologna.

The exhibition explores how medieval Bologna, with its porticoed streets, towers, communal buildings, main square and mendicant churches, became a center of higher education in the late Middle Ages. Home to the oldest university in Europe, Bologna has fostered a unique artistic culture with its large population of discerning readers. The city became the preeminent center of manuscript production south of the Alps, and it helped spark a revolution in the medieval book trade. The manuscripts circulated in a thriving market of scribes, illuminators, booksellers, and patrons mostly operating outside the traditional monastic scriptoria. The university first specialized in law, and many law books have been illuminated in Bologna with vivid tales. The teachers enjoyed high social status and were buried in impressive stone tombs carved with class scenes.

A highly respected curator of medieval and Renaissance art, Kennedy also curated the award-winning exhibition Holiness in pictures: the art of the Dominican and Franciscan orders in Renaissance Italy, exhibited at Frist in 2014-15, and edited the accompanying catalog of the same title. The research that resulted from the exhibition served as the basis for an honorary seminar at Tulane University.

Exhibition catalog
The exhibition is accompanied by a richly illustrated 256-page hardcover catalog entitled Medieval Bologna: art for one University town, published by Paul Holberton Publishing (London). Edited by the Principal Curator of the Frist Art Museum Trinita kennedy, the publication comprises seven essays and is the first major study in English of the illumination, painting and sculpture of manuscripts in Bologna between the years 1200 and 1400. The essays, written by academics, a curator, curators and a museum educator, create a rich context for the works in the exhibition, many of which have never been studied in depth or published before. The book aims to broaden our understanding of art and its purposes in the medieval world.

The authors describe the process of making books in Bologna, including the pigments used by illuminators. They also evoke the illustrious foreign artists called to work in the city, in particular Cimabue and Giotto; the devastating impact of the bubonic plague; and the political resurgence of Bologna at the end of the 14th century which led to the construction of the Basilica of San Petronio, one of the largest churches in the world, in honor of the city’s patron saint.

The catalog will be available for purchase in the Frist Art Museum gift shop and from bookstores in October 2021.

Thank you from the supporters
The exhibition was made possible in part by NEA Art Works, the Anne and Joe Russell family, the Samuel H. Kress Foundation, the Robert Lehman Foundation and members of the Frist’s Picasso Circle.

The exhibition catalog is published with the assistance of the Gladys Krieble Delmas Foundation and In addition: a program of the JM Kaplan Fund, with additional support from the Samuel H. Kress Foundation and NEA Art Works.

About the Frist Art Museum
Accredited by the American Alliance of Museums, the Frist Art Museum is a non-profit 501 (c) (3) art exhibition center dedicated to presenting and creating high-quality exhibitions with programs related educational and community outreach activities. Located at 919 Broadway in downtown Nashville, Tenn., The Frist Art Museum features the best visual art from local, regional, national and international sources in exhibits that inspire people through art to look at their world of art. ‘a new way. Accessibility information can be found at FristArtMuseum.org/accessibility. Entrance to the gallery is free for visitors 18 and under and for members, and $ 15 for adults. For current hours and additional information, visit FristArtMuseum.org or call 615.244.3340.

Two million needed to save the Derby Museum and Art Gallery