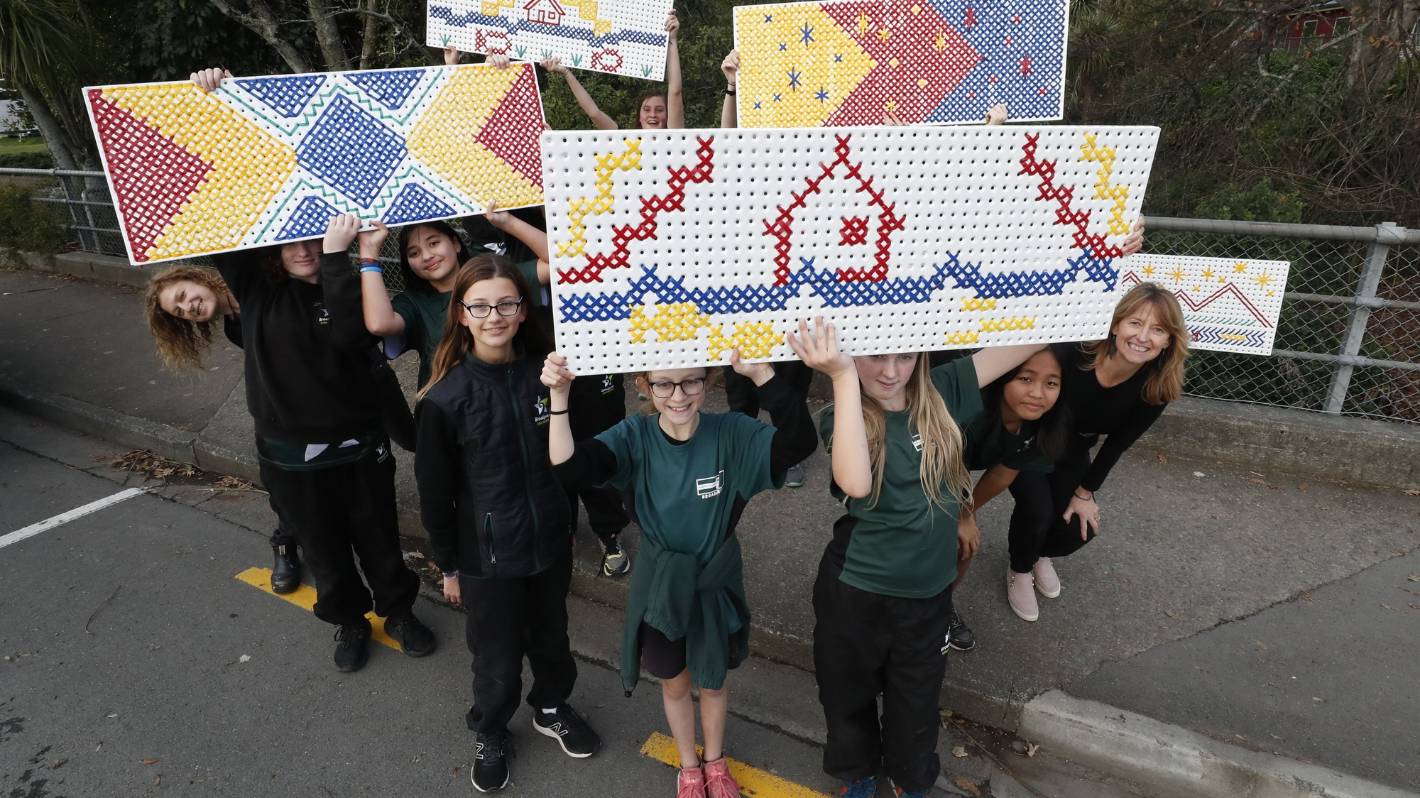 The students’ public art work focuses on an overlooked stream

Schoolgirl Kaylee Douglas is proud to have created something lasting, which connects her school to the land around her.

The Broadgreen Intermediate pupil was among a group of Nelson school pupils, fixing carefully crafted artwork on a nearby roadside bridge after classes ended on Wednesday.

Passers-by could have been forgiven for missing a stream that ran under the bridge on the busy road, where three schools sat side by side.

But it was hoped that the panels that now adorn the bridge would help change that.

The work was one of several public displays created by children in suburban Stoke celebrating Poorman Valley Stream, which runs from Marsden Valley to the Airport Peninsula.

Five schools and one kindergarten took part in the project to help people think and care about the stream, as part of Nelson City Council’s Healthy Streams initiative.

Artist Vickie Smith has been hired by the council to facilitate the arts program.

He used the celebration of Matariki — the beginning or Maori New Year — as a “framing concept,” she said.

“Matariki is a celebration of whānau and planning for the future.

“Hopefully the future of this stream is better nurtured by the community around it.”

The creek was under pressure from sediment, toxic materials washed down the drain and trash, she said.

“People don’t really care for natural things, they take them for granted,” said the Grade 8 student, who lived near the creek.

She said that the natural environment takes care of us and we should take care of it too.

Harrison was one of many pupils who had helped primary school children at nearby Nayland School make two of the panels.

The artwork was made from pegboard metal, donated by Community Artworks.

The designs were made by weaving strips of recycled PVC through holes in the boards, in the style of traditional Maori tukutuku weaving.

The designs included depictions of streams with eels and fish, whare, poutama or stages of learning, and the constellation Matariki.

Art teacher Jeana Packer said the students “worked very hard”, putting in many hours after school and during breaks to complete assignments.

Weaving four of the strips through a hole was no small feat, with students often having to use pliers, she said.

The school jumped at the chance to get involved in the project, which fitted well with its school-wide investigation into kaitiakitanga, or guardianship and protection.

Council projects on the creek also included restoration of its habitat and a new pathway along the waterway between Main Rd Stoke and Neale Ave.

Outdoor Education and Horticulture students from Nayland College participated in the planting along the creek, while Art, Science and Maths students contributed to the art displays, currently on display at the Stoke Library and at Putangitangi-Greenmeadows.

Children from various other schools also participated in the waterfront planting, with a map showing where all the artwork and plantings were on display in Putangitangi-Greenmeadows.

Brightly painted plywood rounds, some with UV paint, were made and installed elsewhere along the river and on fences, by children from Nelson Christian Academy, Birchwood School and Nayland Kindergarten.