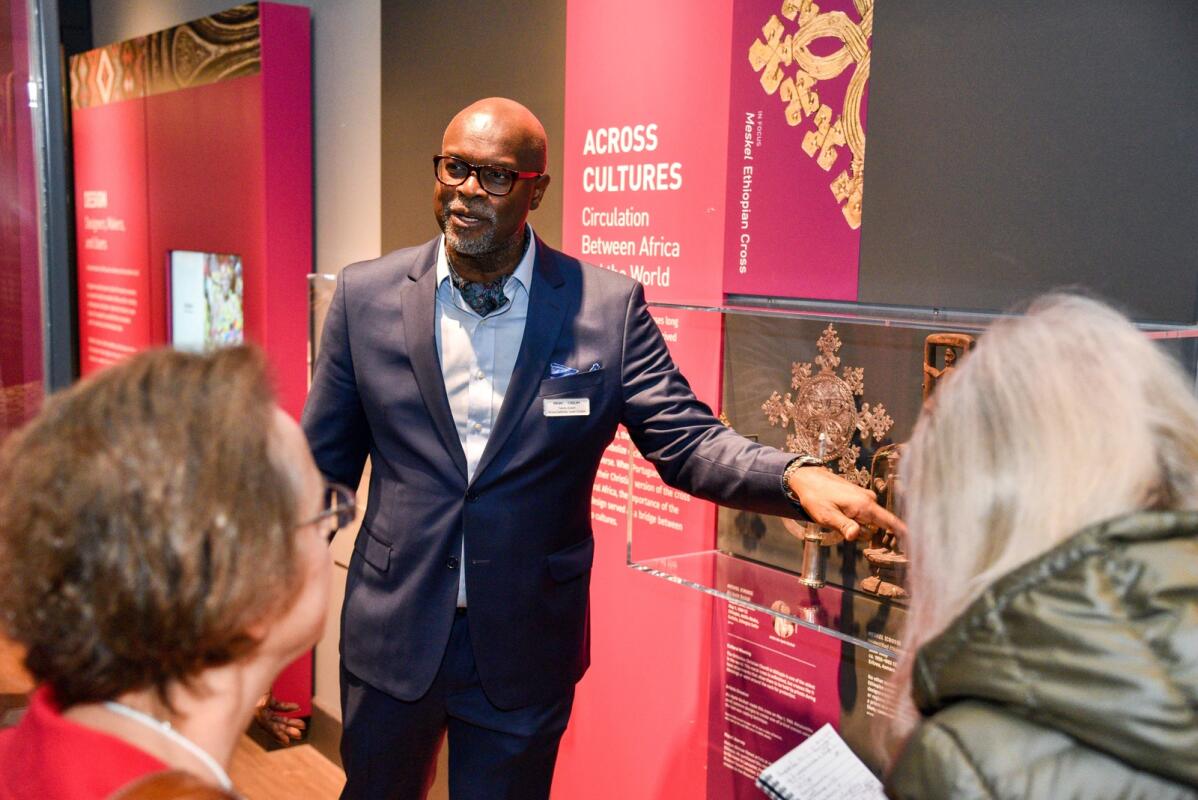 The National Gallery of Art in Washington has alienated “Fowl”, an 18th century sculpture from the Royal Court of Benin, as part of its effort to repatriate it to Nigeria. The Stanley Museum at the University of Iowa is also among the institutions in the works if repatriating pieces it learned were looted in the 1800s. (National Gallery of Art via The Washington Post)

Senior Curator Tukufu Zuberi tours the Penn Museum’s African Galleries. The University of Pennsylvania Museum of Archeology and Anthropology – or Penn Museum – is working to transfer legal ownership of its 196 works directly related to the 1897 attack to Nigerian authorities. (Raffi Berberian via The Washington Post)

IOWA CITY – Like more than a dozen other museums working to return objects and artifacts stolen in the 1800s to Nigeria, the University of Iowa Stanley Museum of Art has held a hearing with the Oba of Benin this fall in hopes of repatriating two pieces “to their rightful owners as quickly as possible.

Stanley’s curatorial staff in 2019 – in the wake of major reporting on looted art in Benin – began researching the provenance of objects in its collection which may have come from the Benin royal court, which British forces have raided and looted in 1897 in what is now West Africa’s Nigeria.

“Provenance research is slow and labor intensive, but we have now identified two works of art in Stanley’s collection which were likely looted during the 1897 British attack on the royal palace in Benin,” said said Lauren Lessing, director of the UI Stanley Museum of Art to The Gazette.

These two pieces include a small brass plaque and a wooden carving of a hen, she said, neither of which are on display.

“We cannot ethically display or publish these items because they rightfully belong to the Oba of Benin,” Lessing said, using the West African word for “ruler.” “It’s his decision whether to display them or not.”

UI is not alone in its repatriation efforts.

Given a growing movement among museums to return colonial-era African art to rightful owners, the Washington Post recently surveyed 70 institutions to determine how many own Benin Kingdom Court-style works and how many repatriate them. Of 56 institutions found with Beninese pieces – for a combined total of 1,200 artifacts – 16 institutions said they were engaged in or willing to repatriate, including the UI Stanley Museum of Art.

The two works of art likely looted during the attack on Benin in 1897 came to UI through collectors “who had no knowledge of their origin”, according to Lessing.

“Following these discoveries, we have started discussions with a member of the royal family who has arranged for us an audience with the Oba of Benin which will take place this fall,” she said.

The university is also corresponding with Nigerian federal officials who will facilitate the return of the artworks.

“Our goal is to alienate them and return them to their rightful owners as quickly as possible,” Lessing said.

The Washington Post reported that provenance and repatriation efforts accelerated at museums nationwide following the 2020 killing of George Floyd in Minneapolis and the ensuing racial reckoning. COVID-19 has also played a role in pandemic closures giving museums more time for introspection.

In addition to UI’s Stanley and others, the University of Pennsylvania Museum of Archeology and Anthropology — or Penn Museum — is working to transfer legal ownership of its 196 works directly related to the attack on 1897 to Nigerian authorities, the Post reported. In March, the Smithsonian announced plans to repatriate dozens of Beninese works.

The Post – in its investigation – found that half a dozen are in the works, including the Metropolitan Museum of Art in New York, which agreed in November to return three pieces to Nigerian officials, further committing to future exchanges and share their expertise.

The repatriation rush has created a backlog among Nigerian agencies – forcing them to prioritize returning the most important collections, according to the Post.

UI’s Lessing said the prioritization is “entirely the decision of the Oba and the Government of Nigeria”.

“We formally offer to return these items, and we will hold them (without displaying them) until the Oba and the Nigerian government are ready to receive them,” she said.

To bring Nigerian artefacts home, the country’s National Museums and Monuments Commission negotiates with institutions – largely focusing on large collections, as shipping, storage and maintenance costs can be impractical for some Nigerian institutions.

“We are aware of the shortcoming (of the Nigerian system) and the cost of storing and protecting them,” Phillip Ihenacho, of the Legacy Restoration Trust which builds Nigeria’s museum infrastructure, told The Post. “The first step is a change of legal title, so that Nigeria is recognized as the owner. I don’t think the end goal should be that every item that exists outside of Africa should be in Nigeria. Some may stay abroad as cultural ambassadors.

But Nigeria should have a choice, Ihenacho said.

As to whether UI is investigating the provenance of other pieces in its collection, Lessing reiterated its commitment to researching the history of all artwork in the museum – noting that the staff is small and the work is “slow and slow.” meticulous”.

“But we will continue to do this work, always, in order to learn as much as possible about the objects in our custody,” she said.

No credit check for checking account or cash advances