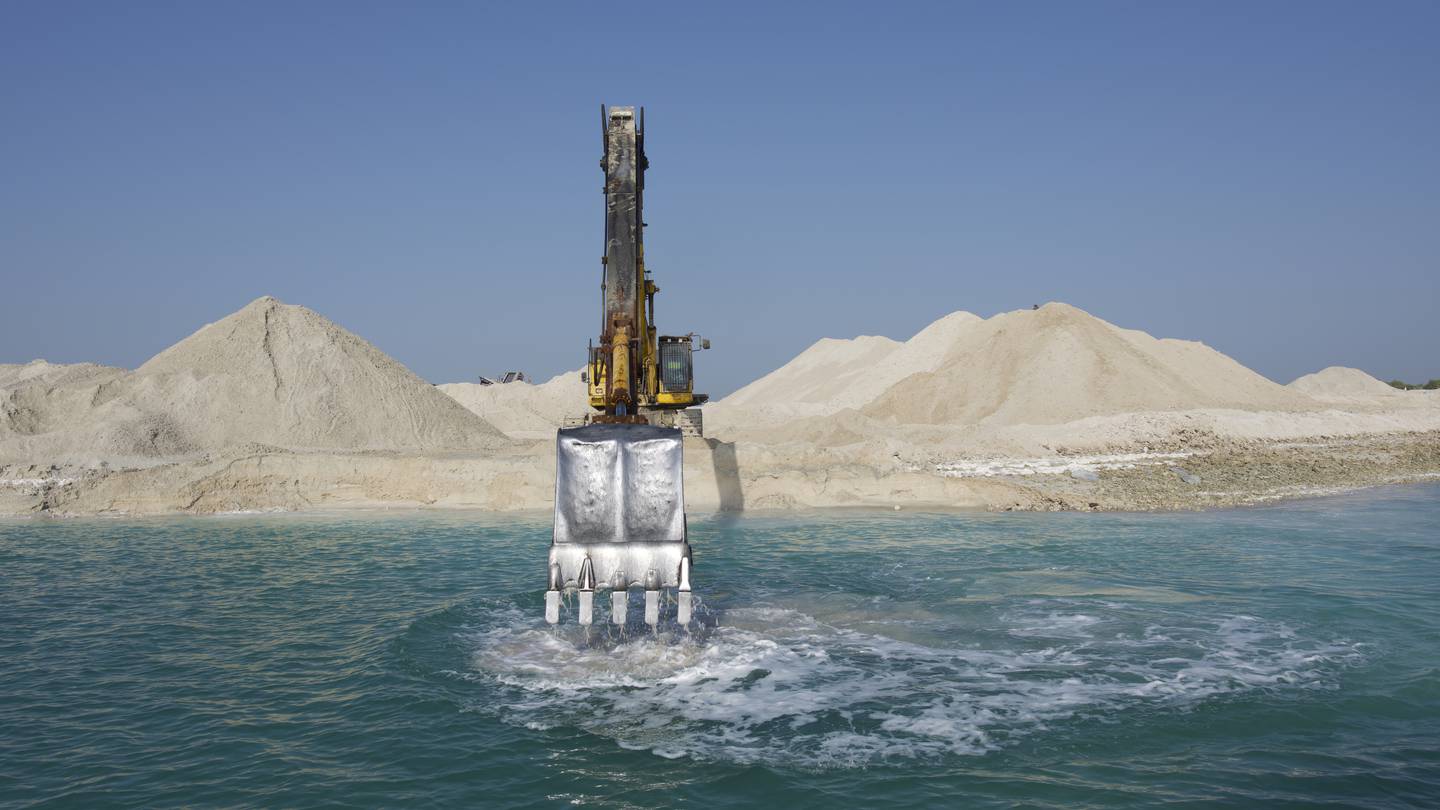 December’s flat light is settling in Washington, but the MEI Art Gallery has quenched the winter gloom with artwork that trembles in vivid blues, baby pinks, candy yellows, and soft, almost palpable greens.

But at the heart of it is a celebration of color, pure and simple: the fantastically painted creature-like sculptures of Mohamed Ahmed Ibrahim, in stripes and patterns of vivid blues, greens and pinks; a 3d star shaped wood sculpture, painted as if dyed in mauves, purples, oranges and blues by Ebtisam Abdulaziz (Focal illusion, 2019); or an interior of the Indian Club in Abu Dhabi bathed in mossy green and washed out in the photograph by Lamya Gargash The Court, The Indian Club (2014).

And the great blue sky of the UAE crosses all the works, by Tarek Al-Ghoussein Odysseus (2016 â€“ ongoing) series, his attempt to photograph all the islands of Abu Dhabi, to Augustine Paredes Sunset over the Mina Zayed parking lot (2021), with its dark blue stripe: “So let’s go, you and me / When the evening spreads out against the sky”, as TS Eliot writes – not Paredes, although he also publishes poetry -.

The sky was actually curator Munira Al Sayegh’s inspiration for the exhibition.

â€œBetween the sun and the sky, there is an idea of â€‹â€‹possibility, the idea of â€‹â€‹growth,â€ she says. â€œIt’s very relevant to how the UAE feels about us, the generation active in the arts, and it quickly started to frame what I was watching. A lot of places feel like they’re stagnating right now, but in the United Arab Emirates, things are moving very quickly. â€

Al Sayegh has deliberately chosen artists who work in the United Arab Emirates – Emirati residents and non-Emirati alike – to represent the country. She has also selected a variety of generations, from older artists like Abdulaziz and Mohammed Kazem to younger ones like Alaa Edris and Afra Al Dhaheri. She even manages to extract a colorful work from Al Dhaheri’s typically monochrome palette: the beautiful St Ives Hair Drawing 8, 2019, produced while the artist was in residence in St Ives in England, another city marked by the meeting between sky and sea.

By setting up these intergenerational meetings, a curious effect emerges: the lines between the generations, so often in conflict that the Emirati art world counts with its explosive growth, are blurred.

â€œThere are a lot of artists who intersect with the next generation, like Tarek Al-Ghoussein,â€ says Al Sayegh.

Al-Ghoussein is a longtime professor in the visual arts department at NYU Abu Dhabi and was recently appointed program director for his new masters in fine arts. â€œYou can’t even ignore his presence among the creatives working today – both those he learned and even those he didn’t. Having him on the show, alongside Mohamed Ahmed Ibrahim, someone with whom I correspond on a daily basis. on contemporary ideas, shows that these connections are not about history, but continuation.

The idea of â€‹â€‹continuation is a specific reference in the context of UAE art history: Al Sayegh refers to the idea that there was an insurmountable chasm between the early 2000s work of the so-called Five – the artists, including Ibrahim and Kazem featured in this salon, which has often exhibited with Hassan Sharif – and the explosion of contemporary practices from the 2010s to the present day.

Indeed, in retrospect, one of the most interesting aspects of historic Emirati art was its diversity; works of art did not blend into rigid language and each artist had their own style. The same is found in Between Heaven and Earth: Al Dhaheri’s sculptures, directed by matter, which investigate memory and identity, stand alongside Shaikha Al Mazrou’s colorful formal experiments, in which matter plays a part. the role of second string with a trompe-l’oeil visual effect. his sculptures create.

Kazem’s duration experiment, in which he documented the laundry hanging in front of his window (the Windows, 2019-2020), easily rubs shoulders with Al-Ghoussein’s own exercise of performative documentation in Odysseus. The expressive paintings of Hashel Al Lamki The day we met Thomas (diptych) (2021) portray the natural environment – as does the work of Solimar Miller, but in a craft-oriented fashion of his textiles, such as Environment, also produced this year.

And instead, intergenerational connections emerged behind the scenes. Over the past two years, Al Sayegh has set up the Dirwaza Conservation Laboratory, an independent project that acts as an incubator for emerging curators. The current cohort of six conservatives collaborated with her on the creation of Between the Sky and the Earth, which was also curated with assistance from the NYUAD Art Gallery.

â€œI feel extremely inspired and grateful to have all the opportunities I have had in the United Arab Emirates,â€ she said. â€œIt was important to extend this to the young curators with whom I work [with] and to the artists we are highlighting in this exhibition.

Between Heaven and Earth: Contemporary Art from the United Arab Emirates is at the MEI Art Gallery in Washington, CC until March 31, 2022