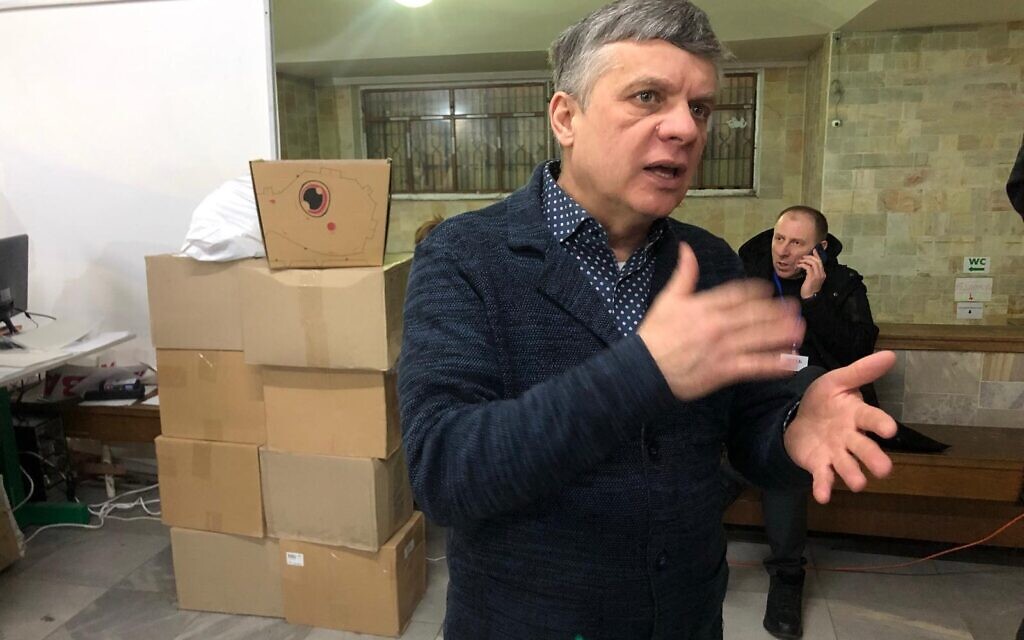 LVIV, Ukraine – The National Art Gallery in Lviv is Ukraine’s premier art museum, and for good reason. Founded in 1902, when this western Ukrainian city was part of the Austro-Hungarian Empire, its permanent collection today numbers more than 60,000 pieces spanning seven centuries.

With Ukraine now under attack from Russia, the gallery is closed, its masterpieces hidden in the branch of the Potocki Palace Museum or behind tall piles of sandbags.

The museum offices, however, have never been busier.

Outside, a line of young Ukrainians winds its way down Kopernyka Street, eager to volunteer to support their country’s fight against Russia.

The ground floor is filled with women packing cardboard boxes with medical supplies.

The operation is supervised by a Leopolitan named Mark Fetsych, head of the oncology department at a local hospital before the invasion.

Now he spends twelve hours a day at the museum and very little time in the hospital.

Volunteers at the offices of the National Art Gallery in Lviv, March 4, 2022. (Lazar Berman/The Times of Israel)

“In my daily practice, I can only help a few people a day,” Fetsych explained. “But right now, by coordinating this medical unit, we can help thousands of people.”

The goods come from Europe and the United States, he said. Ukraine has a logistics center in Poland and sends goods from there to Lviv.

The museum houses one of five volunteer sorting and dispatch centers in Lviv.

Volunteers at the National Art Gallery in Lviv pic.twitter.com/hNWv4SvvF5

At the entrance to the current medical floor, boxes from Poland are opened and sorted into boxes. Other women with lists fill out applications and send them to the other end of the medical area.

“We send everything, basics like pills, special medical equipment, military medicine, really everything,” the surgeon said.

Ninety percent of the supplies are for civilians, he said, but the country still has a major need for specialized military medical supplies, especially personal medical kits.

“Now we ask everyone in the world, if you can, at least give us something,” Fetsych pleaded.

The museum’s volunteer center is open 24 hours a day, seven days a week, but Fetsych said he was trying to calm down. “I’m a surgeon, I know what it means to burn out like a doctor, so I know sleep time is very important, so I try around 10-11pm to leave and go to sleep.”

There are hundreds of Ukrainians working in the museum offices, all volunteers who heard about the center through word of mouth.

They work quickly, quietly and seriously. Although at first the scene seems chaotic, there is a frantic order for the young men and women to prepare food, spread out toys and carry bags to trucks waiting outside.

On the third floor, Yuri Viznyak, the director of the art gallery, stands in his office. Several volunteers man the phones under a plasma TV showing the work being done in the various offices of the museum.

“We have been working for seven days already,” Viznyak said. “We were the first to receive help from our fellow citizens. Three days ago we started receiving from Poland from abroad.

Volunteers at work at the National Art Gallery in Lviv pic.twitter.com/qtOFKWlRfN

“At the beginning, we gave food directly to the refugees,” he explained. They now distribute to local organizations and governments.

On Wednesday alone, 55 tonnes of humanitarian aid was delivered to the eastern cities of Kharkiv and Sumy, as well as to Odessa on the Black Sea.

Outside, a blue truck was loaded with supplies for the capital, Kiev, a key Russian target.

Viznyak said he would continue the logistics operation for as long as necessary. Either way, he doesn’t have to worry about the thousands of visitors who come to see European masterpieces every day.

“All images and art are hidden,” he explained, before shaking hands with this reporter and quickly returning to work.

If so, we have a request.

Every day, our journalists aim to keep you up to date with the most important developments that deserve your attention. Millions of people rely on ToI for fast, fair and free coverage of Israel and the Jewish world.

We care about Israel – and we know you do too. So today we have a question: show your appreciation for our work by join the Times of Israel communityan exclusive group for readers like you who appreciate and financially support our work.

You are a dedicated reader

We’re really glad you read X Articles from The Times of Israel over the past month.

That’s why we started The Times of Israel ten years ago – to provide discerning readers like you with must-read coverage of Israel and the Jewish world.

So now we have a request. Unlike other media, we don’t have a paywall in place. But since the journalism we do is expensive, we invite readers to whom The Times of Israel has become important to help support our work by joining The Times of Israel community.

For just $6 a month, you can help support our quality journalism while benefiting from The Times of Israel WITHOUT ADVERTISINGas well as access Exclusive Content only available to members of the Times of Israel community.

Thank you,
David Horovitz, founding editor of The Times of Israel