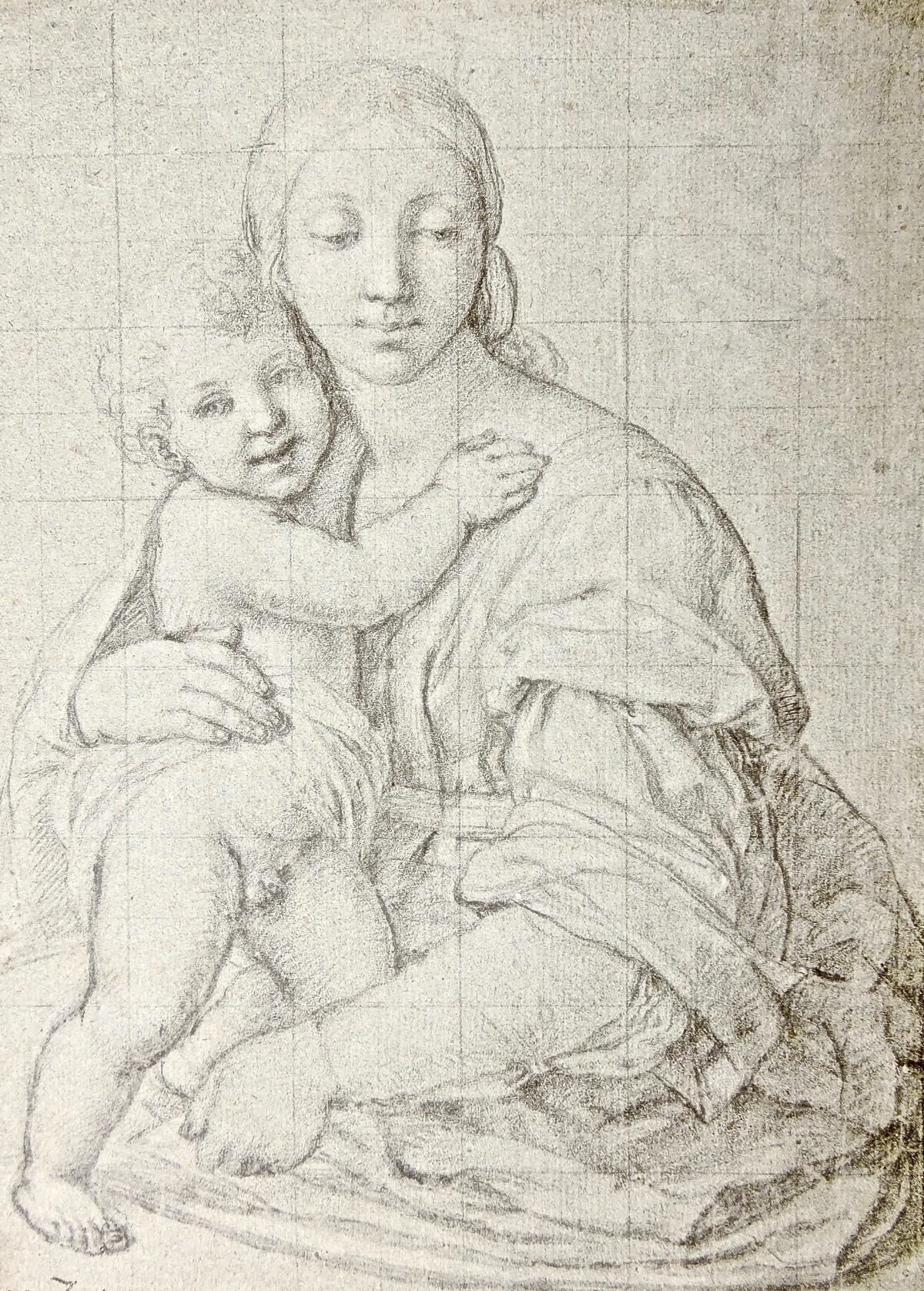 What’s the perfect gift for an art museum? A rare baroque drawing

I am delighted to share with you all, on Boxing Day, a beautiful drawing that has just entered the collection as part of a generous end-of-year donation of 36 European and American drawings from collectors John and Sylvie O’Brien.

The drawing was made by the Italian Baroque artist Sassoferrato (Giovanni Battista Salvi 1609-1685 – known by his birthplace of Sassoferrato, a small town between Florence and Rome). The name may be familiar to some of you as he is the artist responsible for the image of Saint Lucia that we highlighted during our summer exhibition Bernini & the Roman Baroque: Masterpieces from Palazzo Chigi in Ariccia.

How delicious that Hagerstown now has a Sassoferrato of its own!

Sassoferrato made a consciously retrograde art. Although he lived entirely in the era defined as the Baroque period, Sassoferrato drew inspiration from the idealized beauty of Renaissance master Raphael (1483-1520) rather than the drama and theatricality characteristic of art. baroque.

His designs are relatively rare and most of those known are in the Royal Collection at Windsor Castle. They were purchased in Rome in 1768 by Richard Dalton, librarian to George III and adviser for the constitution of the collection of drawings of the king.

Sassoferrato was known to often derive his compositions directly from Raphael’s work, and in this case his drawing is based on Raphael’s Madonna & Child (circa 1509), now in the National Gallery in London, sometimes referred to as the Mackintosh Madonna.

Raphael is associated with beautiful humanistic depictions of the Madonna and Child Jesus – images in which the Madonna appears more like a real mother, and the tender relationship between mother and child is captured. You can see this influence and tradition in this pretty sheet of Sassoferrato.

Sassoferrato’s oil paintings are characterized by their impeccable and neat finish, clarity and sense of color. You can barely see a brush stroke. Here, in graphite on blue paper, we get a much stronger sense of real life than what is typical in his paintings.

In this soft and serene composition, Marie is tender, thoughtful and slightly sad. Often, artists would add a suggestion of sadness to Mary’s expression to show that she was aware of her child’s plight.

The artist has put all his skills at the service of beauty and harmony – yet we feel the movement and the weight, and the baby himself feels very real; he is gently natural, expressive and affectionate.

The design has a beautiful softness in its execution, with a subtle modeling which conveys the roundness of the chubby baby and the texture of his skin. The child’s parted lips are a wonderful detail, capturing the evanescence of the facial expression.

The relationship between mother and child is emphasized through the composition itself. The two figures together form a triangle or pyramid, a style of composition often favored by Renaissance artists to create a stable and unified composition.

The only small area of â€‹â€‹the composition that isn’t as successful in the drawing is the child’s bent leg – Mary grabs her foot – but the curvature of the leg shows the artist grappling with position and perspective.

Artists used drawings to solve composition and perspective problems, or as part of the thought process to fill a commission. Here, the design has been squared for transfer, meaning that the artist has drawn a grid over the composition to allow him to accurately transfer it to the larger size of the canvas.

The detail of Sassoferrato’s drawing and the fact that it is squared indicate that it was used as a source for a painting, and we are fortunate in this case to know that the painting was identified in the collection of the Borghese Gallery. in Rome. Another painting attributed to Sassoferrato’s studio with a similar composition is in the collection of the Rijksmuseum.

Most of her designs are highly finished and squared for transfer like ours. Because he worked to satisfy the tastes of his patrons, he often produced several versions of the same work or variations of compositions. The drawings could therefore have been used to facilitate the execution of several jobs.

Whatever your personal religious beliefs, one of the enduring attractions of depictions of the Virgin and Child is the way they capture and celebrate the power of the bond between mother and child – love, tenderness and the safety of a mother’s arms, the possibility and hope embodied in a new life, and the knowledge that these days are precious.

Sassoferrato captures all of this with exquisite softness and grace in this design that we are proud to add to the museum’s collection.

This article originally appeared on The Herald-Mail: Rare Drawing Among New Gifts at Washington County Museum of Fine Arts

From the White House to America’s premier museum of modern art – Washington, DC as an artistic destination