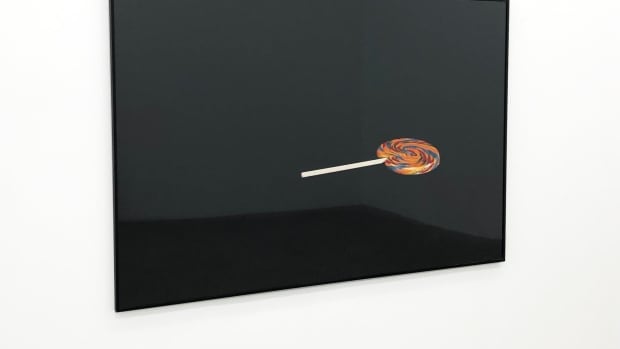 Work of art for dental care: this Vancouver dentist has been exchanging his services for 25 years

Curator Patrik Andersson is days away from the opening of a new exhibition at Griffin Art Projects in North Vancouver. The exhibition will ultimately bring together at least 100 works, most of which represent a who’s who of the established local art scene. They are all very different artists, doing very different types of work, he notes. “But they all go to the same dentist.”

That dentist would be Dr. Zenon Trylowsky. A longtime friend of Andersson’s, he has run a practice since 1996, located in the Vancouver building on Granville Street. “It’s an iconic building, but if people knew what was going on inside …” Andersson muses, pausing. Because as long as Trylowsky has been practicing dentistry – longer, really – he’s also cultivated an art collection. And while he certainly does acquire things through traditional means, he has amassed much of the collection by interacting with his patients: offering dental care in exchange for works of art.

â€œIt’s a great way to: a) help some people who need a little help, and b) you know, add to the collection,â€ says Trylowsky. And although the dentist will not disclose the details of how a transaction will unfold, he has been engaged in this form of pro bono exchange for 25 years. It’s an idea he borrowed from another dentist, he explains – the man who owned the practice before him. When they met, Trylowsky was impressed with the senior dentist’s art collection. Unlike typical waiting rooms, decorated with uninspired landscapes – perhaps a magical eye impression of a catamaran, if you’re fancy – this dentist had a taste for contemporary art. Trylowsky was inspired. Why not surround himself and his patients with what he loved?

And ever since he started his business, he has decorated his office like this. On the whole, the artists he collects are patients of the past and the present. But they are not amateurs. “I don’t think he’s just buying or collecting artwork from an artist who shows up and has a toothache,” Andersson says. “These are strong pieces from strong artists.” And although Trylowsky is reluctant to pick favorites, he notices his fondness for the works of Vikky Alexander, Ron Terada, and Rodney Graham. An article by Kelly Wood – an image of a bright, tough sucker – has been looming in the waiting room for ages, and as the dentist’s humor puts it, it’s a pretty sweet joke. â€œIt was just to, you know, remind people why they’re in a dental office,â€ he says. â€œA subtle clue! “

On September 25, the public will be able to see this work and several dozen others without reserving a clean-up. Griffin Art Projects will host Dents, Loan and Trust Company, Consolidated: The Trylowsky Collection until December 11, while you are in the dentist’s office, a small exhibition will be in progress. Featuring work by Kim Kennedy Austin, Ryan Quast and Neil Wedman, the office event is sadly reserved for patients. But Andersson arranges this bonus exhibit as a nod to a project from his and Trylowsky’s past – something that arguably kicked off the dentist’s collection.

In 1997, Trylowsky was only a year into his practice and Andersson was a starting art curator with nowhere to turn. But he had an idea, which he pitched to his old boyfriend. â€œZenon really needed clients,â€ says Andersson, so he suggested turning the office into an exhibition space. He would get a gallery, and foot traffic could draw customers to Trylowsky. â€œIt was kind of my hook for getting him to let me do shows there,â€ Andersson said. “We thought that was pretty funny, and then it kind of turned out to be what happened.”

For a decade Andersson organized art exhibitions for “The Trylowsky Gallery”. In any other context, their pop-up was just a room across from the main cabinet – a space where Trylowsky struggled with his paperwork. (And that’s where he does it again, by the way.) But the duo enjoyed a prime location. The office is around the corner from the Vancouver Art Gallery, and they would attract museum crowds by hosting their events in conjunction with the VAG opening nights. But in 2007, the dentist’s days as a guerrilla gallery owner came to an end. Andersson’s Curatorial Platform (Trapp projects) had passed the makeshift space, but Trylowsky’s interest in contemporary art persisted.

He had met countless artists, many of them in Andersson’s circles. Often these presentations were strictly dental references, and recently Andersson has given this fact a lot of thought. It comes to his mind whenever he discovers a long-lost piece in the Trylowsky collection – especially the art of colleagues plagued by dental problems. At the time, he told them to “go see Zenon”. And apparently they took his advice; the proof, apparently, is in the collection.

But Andersson found something more revealing while developing the show. The Trylowsky collection is, on one level, the record for a relationship between a dentist and his exceptionally remarkable patients – but it’s also a story about Vancouver art over the past 25 years, he says. â€œI think for a lot of the artists on the show, this will be a nice retrospective,â€ says Andersson. Beyond the people who have regular checkups every six months with Trelowsky, few people have seen this work. But Andersson says they “bring to mind one of the small moments and events in the history of this place. It’s a very local collection except for one or two artists.”

Earlier this week, every item in the collection was handed over to Andersson, and for the first time in forever, Trylwosky’s walls are bare: no home art, no office art. It’s an exciting time, he says, knowing he’s about to share his collection with the public. But maybe it is also strange. Before Andersson offered him the idea of â€‹â€‹doing the exhibition, he didn’t feel like a true collector, he says. â€œBecause you’re kind of surrounded by it, you kind of think it’s a normal thing,â€ he says. To appreciate art, to support art, there is nothing more natural. Said Trelowsky: “You realize it’s a big part of everyday life, in a way.”